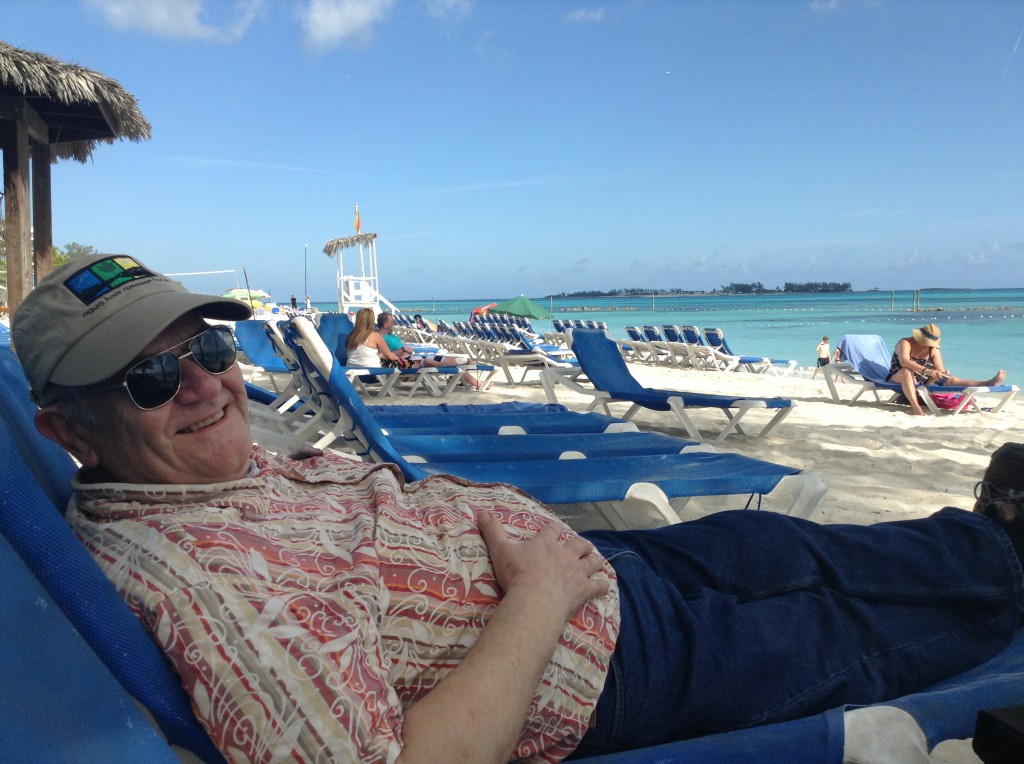 My father Fred and I recently returned from an adventure to Mangrove Cay Club in the Bahamas.  We had planned the trip for over a year in hopes of getting him into his first-ever bonefish.  For me, it was a return to the flats after an absence of about 20 years.

Coming as it did on the heels of my trip to Brazil, I had spent the two weeks leading up to that trip wrapping up a box of sure-fire bonecrushers. 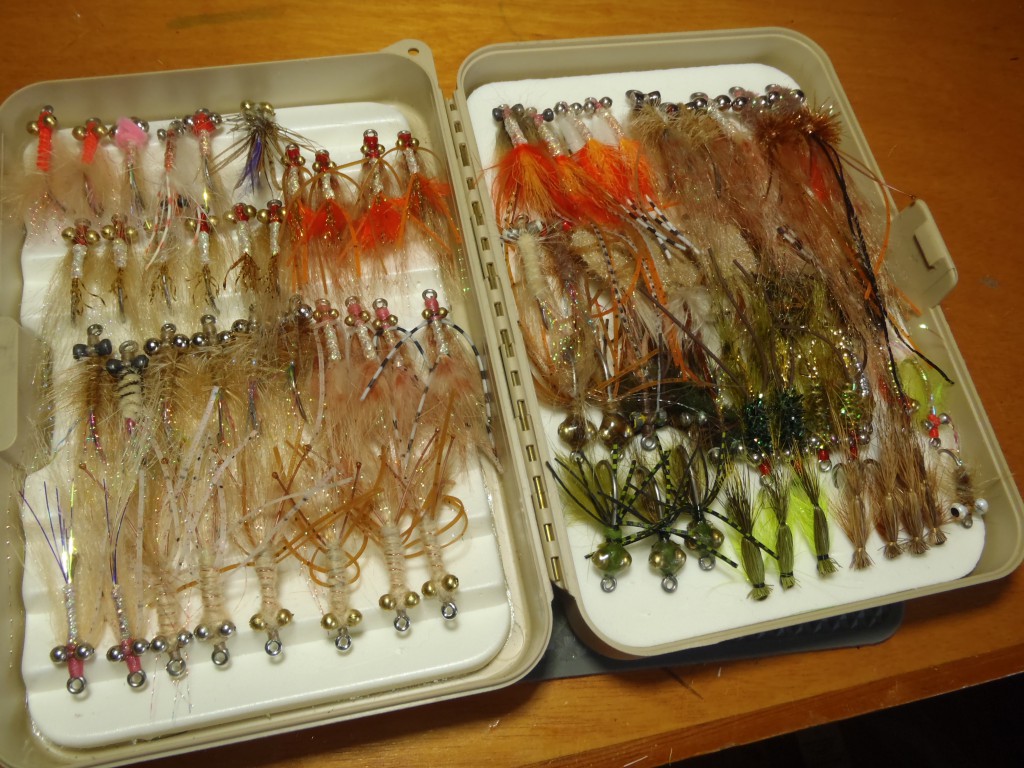 After a reasonably uncomfortable red-eye, cross-country flight, we arrived in Nassau dazed and excited.  A short hop followed over to South Andros Island, and Mangrove Cay where we were to spend the next 5 days. 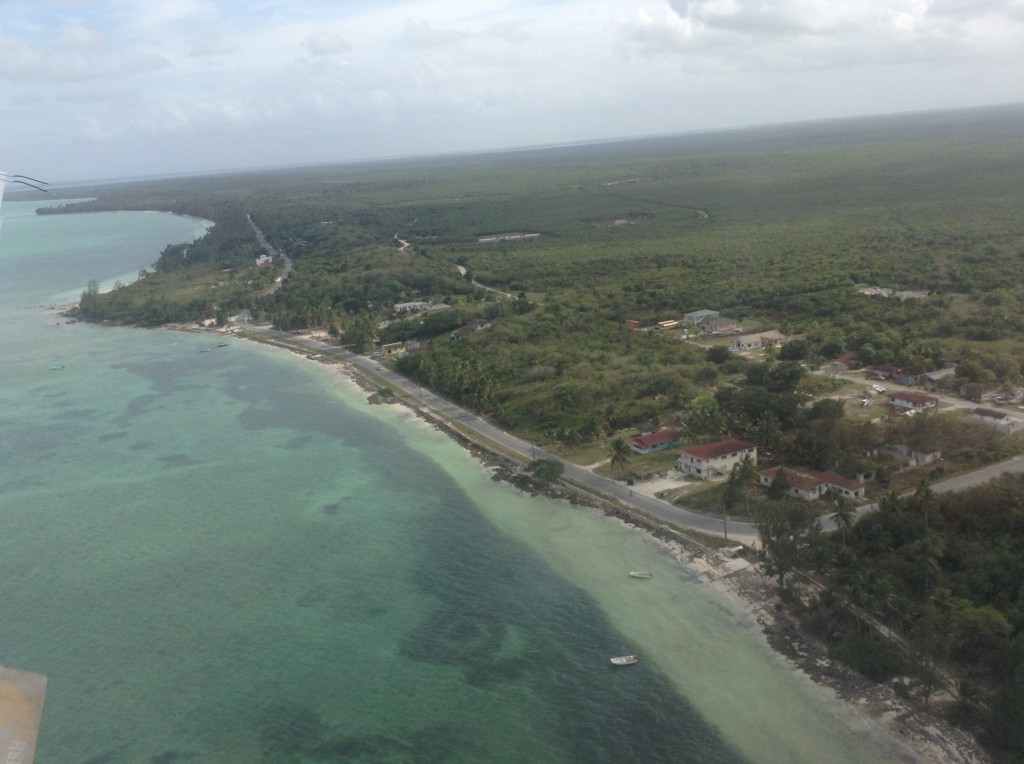 Dawn broke with clear calm conditions and not a ripple on the water of the Middle Bight out in front of the lodge. 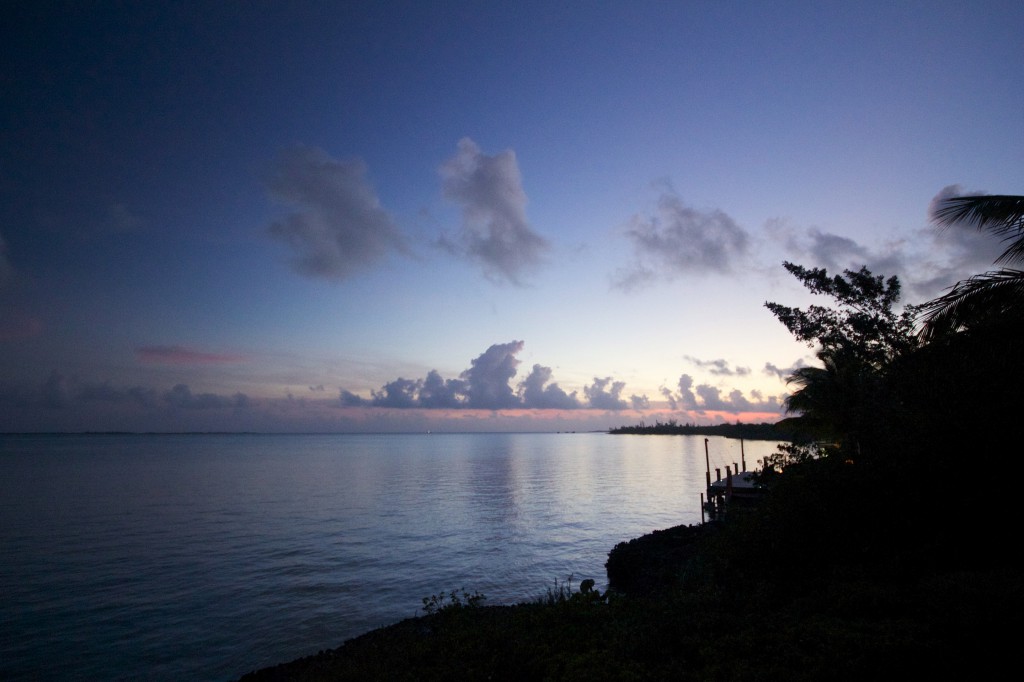 In other words, conditions were perfect for good bonefishing!  We were paired with veteran Mangrove Cay guide, Kiki Adderley, for a crash course in the finer points of angling for the elusive “ghosts of the flats.” 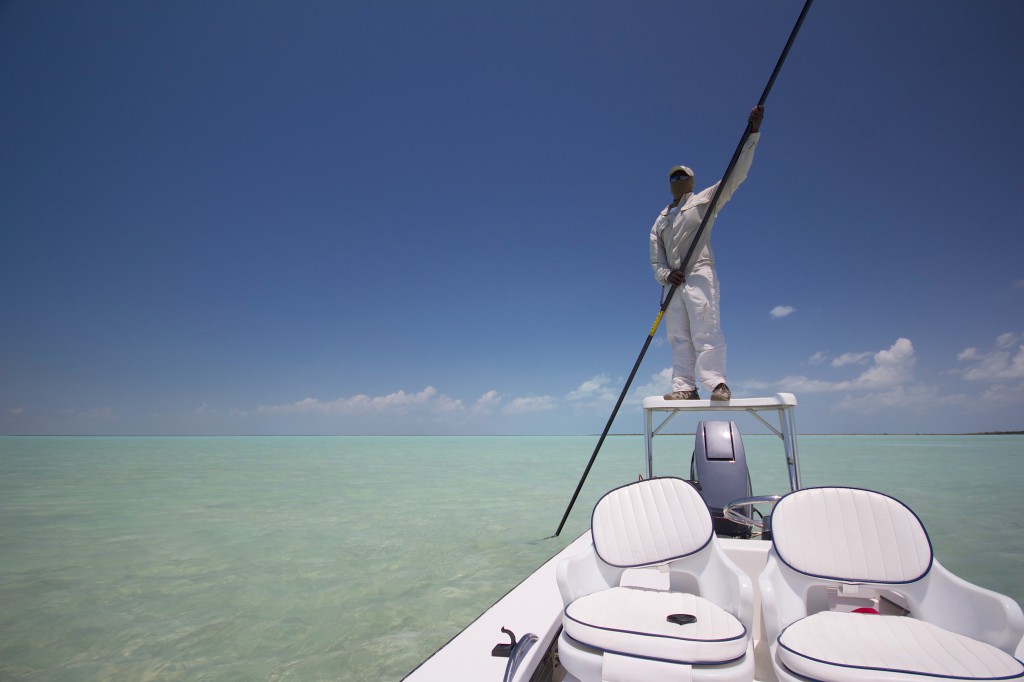 Fred and I took turns on the deck at the front of the boat. Kiki called out the incoming targets, and we each landed several nice fish from 3-4 lbs through the course of the morning. 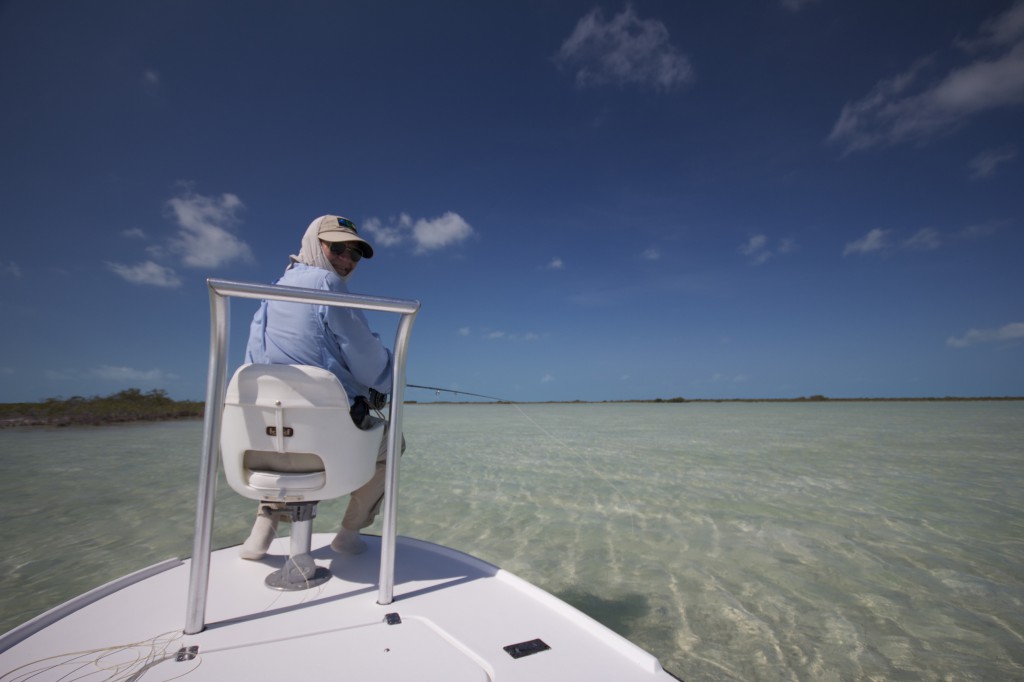 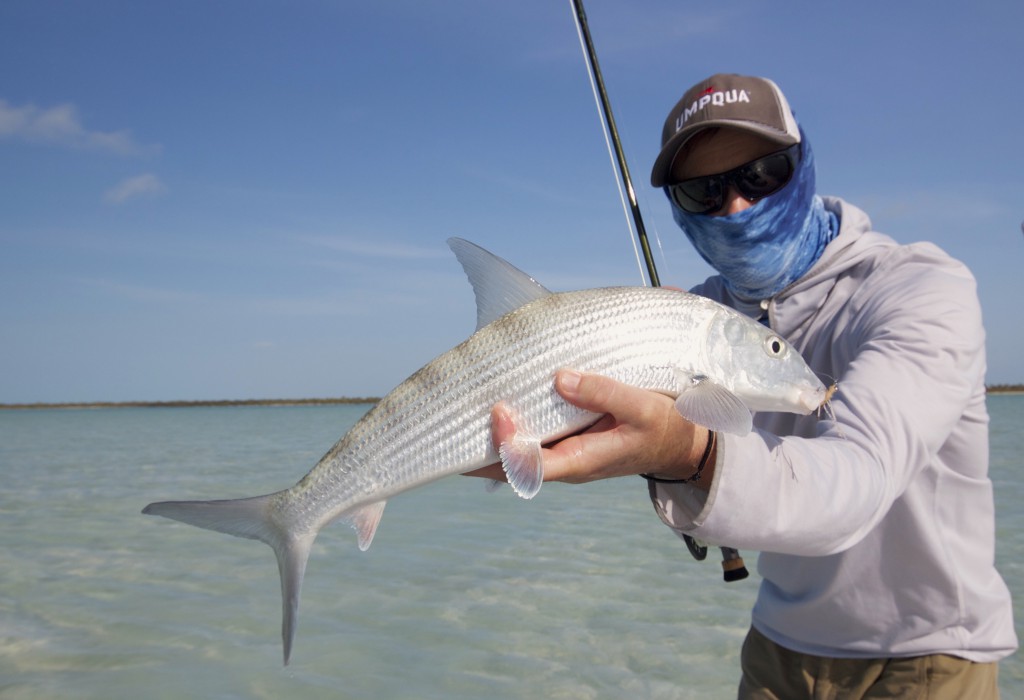 No matter how good of an angler you think you are, this fishing is challenging.  Fish are hard to spot (Fred admitted on day 2 that, even though he had landed a half dozen bones, he had only seen one before it was hooked).  Success was often only possible by the skill of the guides in directing the cast and retrieve when the fish were in range.

The next day, we woke to less-than-optimal weather conditions. 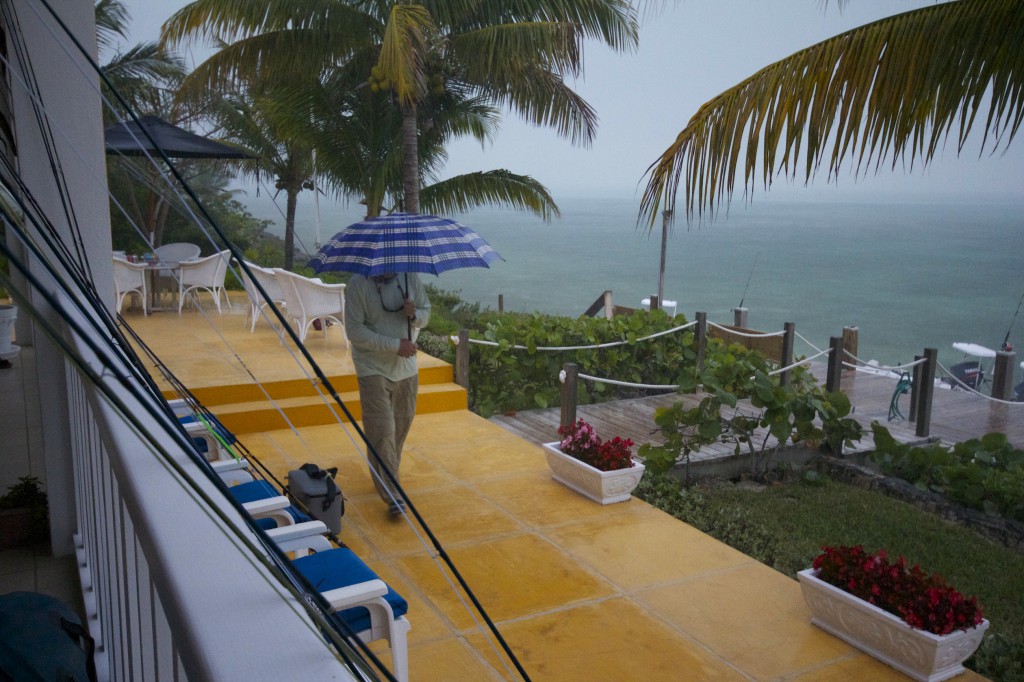 After the morning rain squalls passed, we were left with a freshening wind from the southwest and intermittent clouds, making for much more difficult fishing than the first day.  Fred got a couple from the boat with Kiki, while I opted to wade some promising areas, leading to several shots at cruising fish and one landed.  We hoped for better weather the next day. 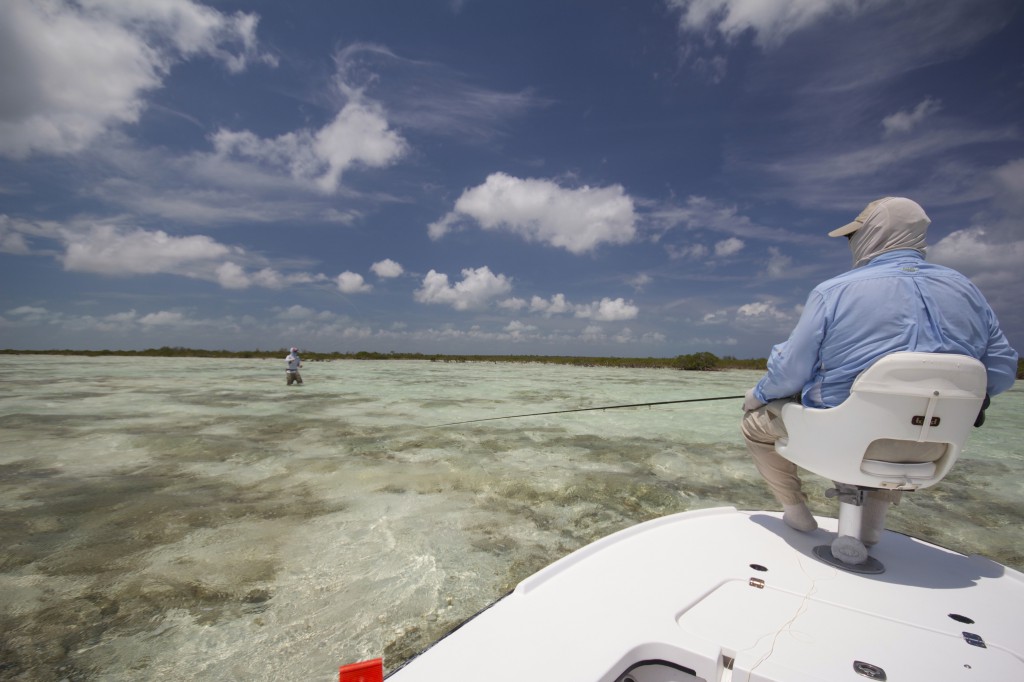 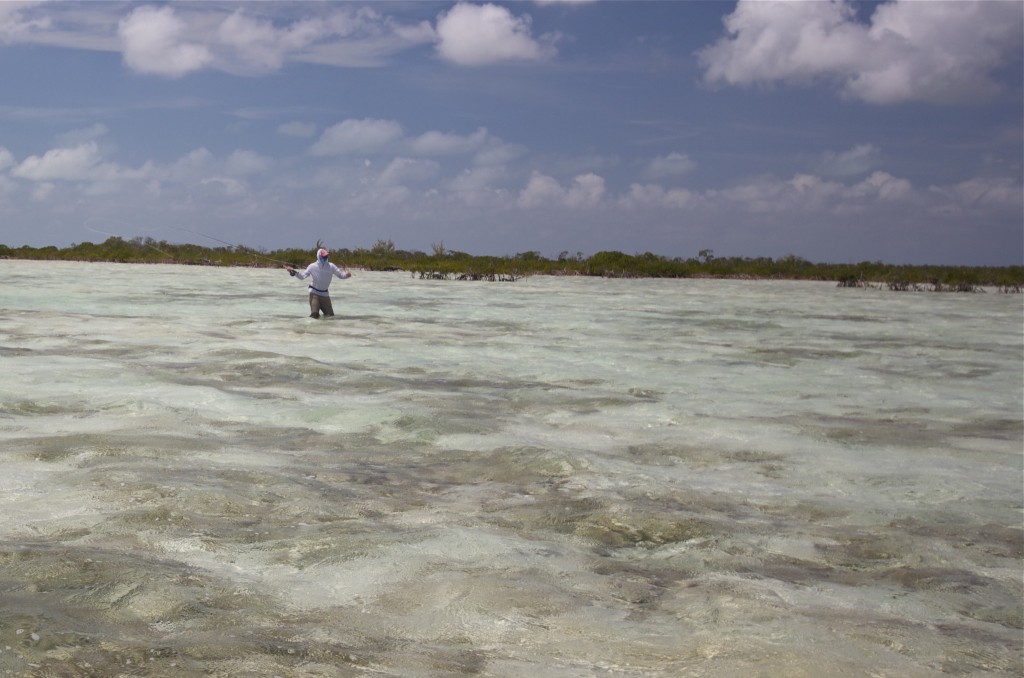 We woke the next day to gusting winds and heavy rain buffeting the cabin. 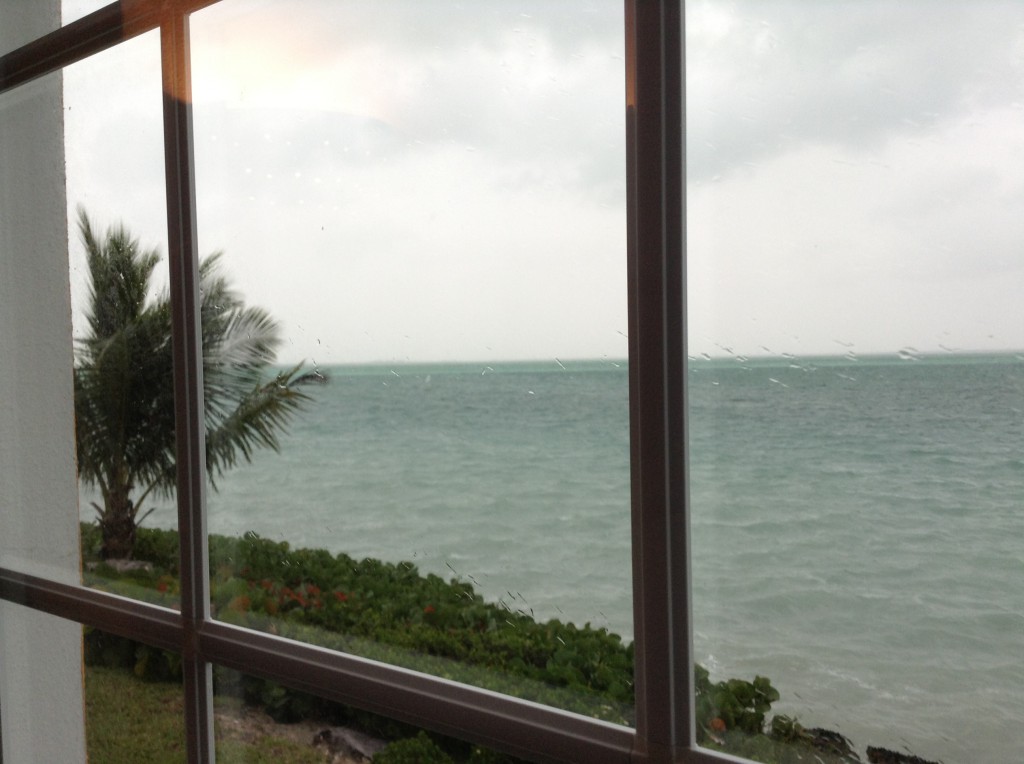 Not good.  A couple boats from a neighboring lodge braved the conditions, the guests looking miserable in full rain suits and taking a beating from the chop.  Alton Bain, one of the owners of Mangrove Cay Club, and the guides huddled and finally decided (after several false starts), that there would be no fishing that day.  Ouch!  I took some solace in remembering being weathered out on a bonefish trip to the Florida Keys 20 years before.  That experience taught me that bones are fair-weather friends: on days like this, bonefish action would not be good.  So we had a day in the lodge.  There are worse places to ride out a storm. 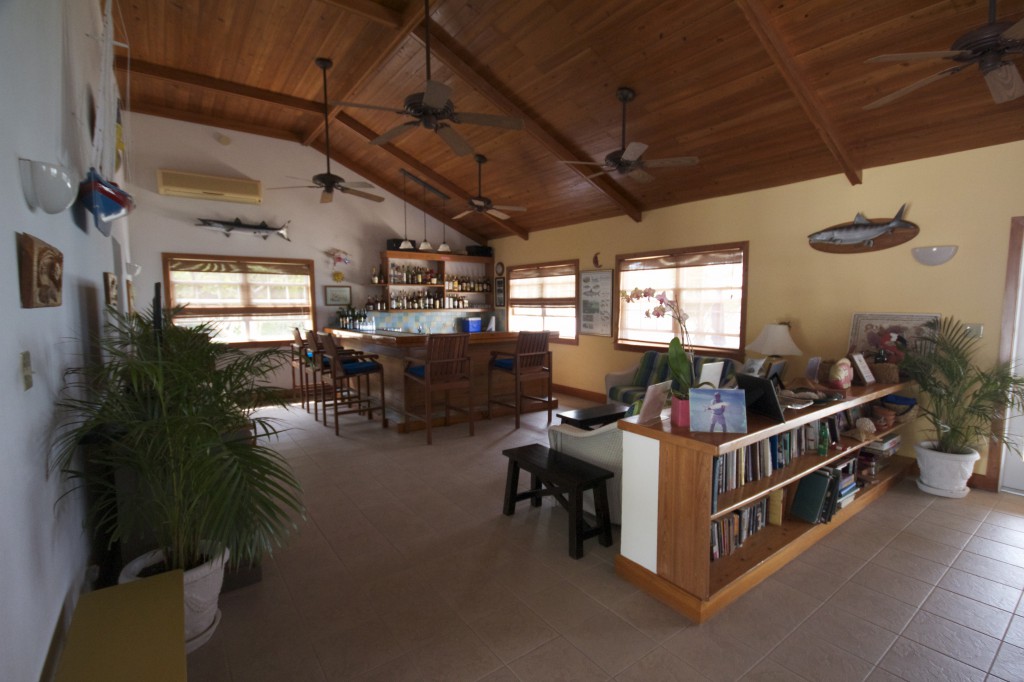 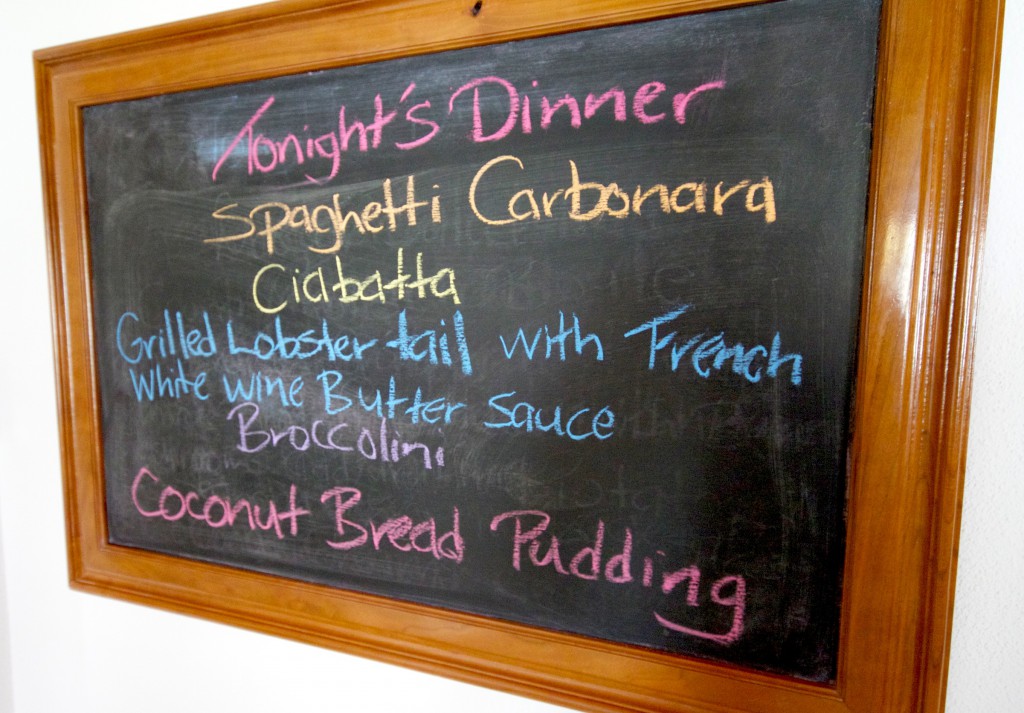 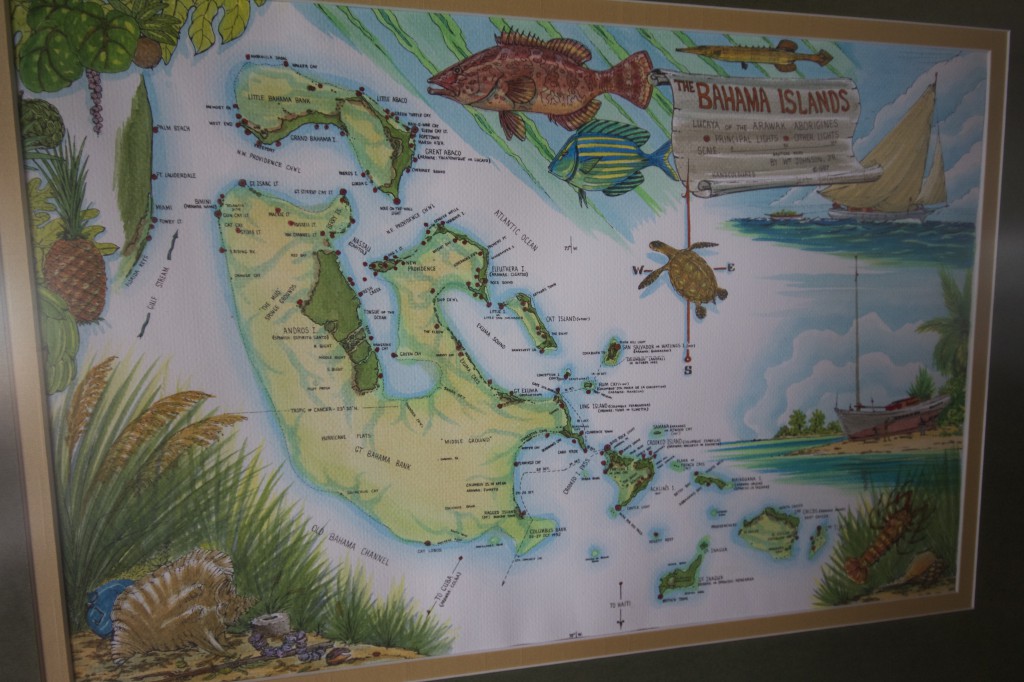 The next day, the wind shifted to the east, and the rain abated.  Fred and I went for a long run to the cays of the western end of the Middle Bight with guide, Percy King.  On this day, I had several shots at bigger single and paired bonefish, but the clouds and chop, along with murk in the water often made it hard to see them before they were too close to the boat for a good presentation.  Even Percy had trouble picking them up.  So most shots were like, “2:00 – 20 feet!”  And when I did get a fish to respond to the fly, the unsettled weather had them even more wary than usual.  Lots of refusals. In the end, although we were on fish all day, including some very nice sized ones, we only got one to hand.

On the last morning, Fred and I opted to fish before our afternoon flight out of Mangrove Cay.  The weather was finally clearing, but the steady wind persisted. 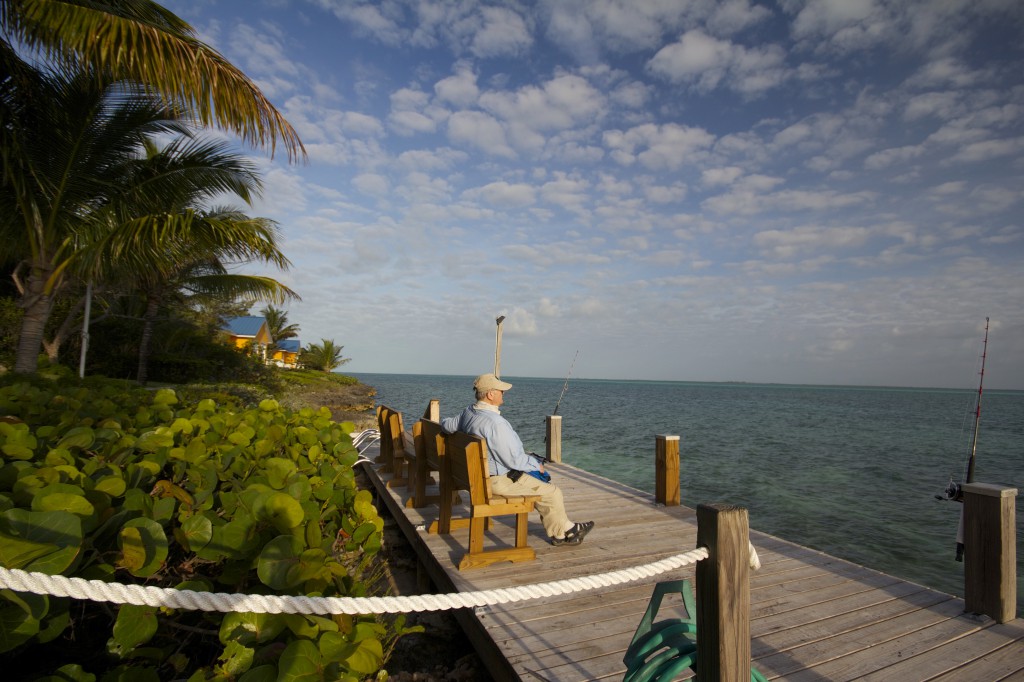 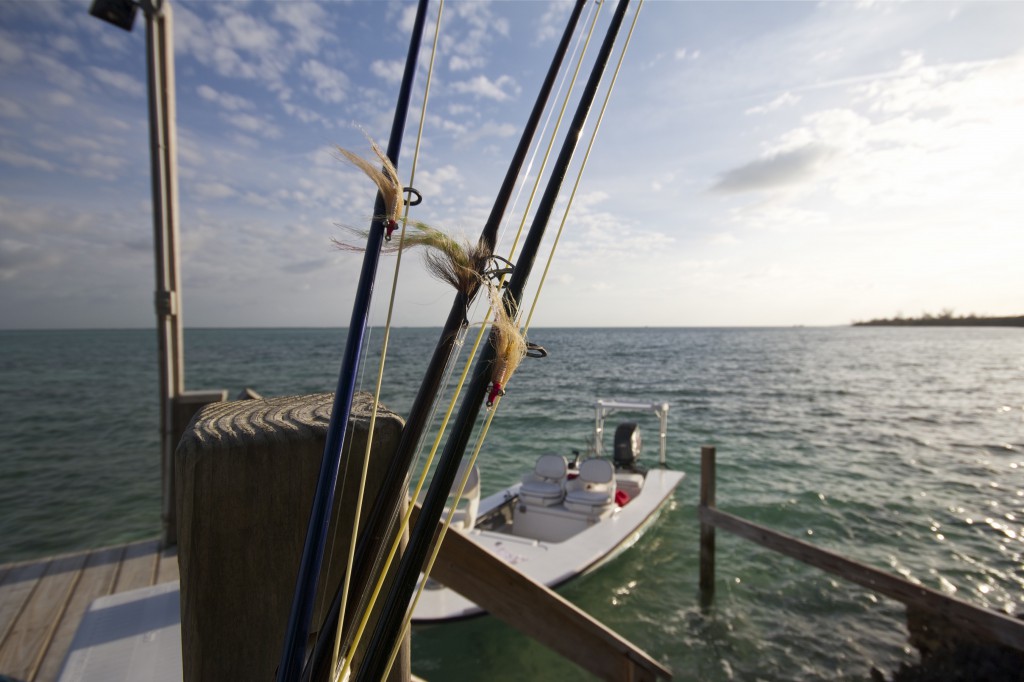 We fished this day in closer range of camp.  Our guide, Prince Moxey, was all-in on my desire to target larger fish.  Fred graciously let me have the front of the boat for the entire session.  Perhaps too, he didn’t relish the prospect of trying to cast in the steady 20-knot wind. 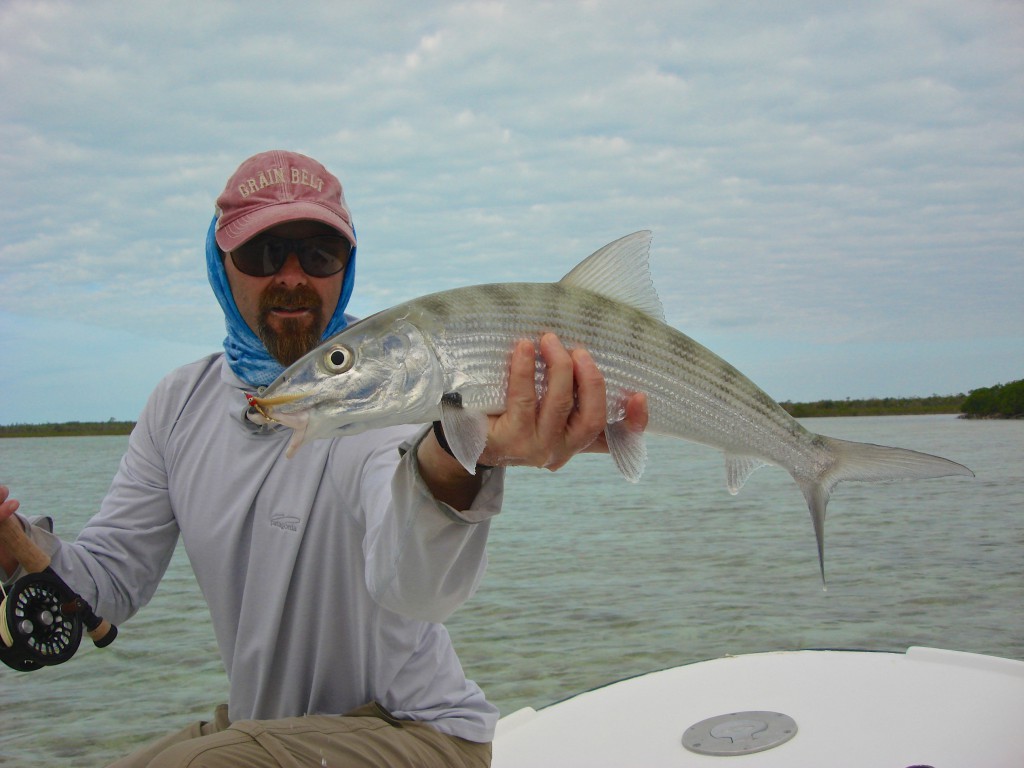 This turned out to be my favorite session of the trip.  Prince encouraged me to dig into my fly box for something meatier than the standard redhead Gotcha that most of the guides favor.  On the premise that big bones like big flies, I tied on Gumby’s Big Bone, a fly Scott had tied and given me for the trip.  It worked!  Bigger singles and fish from pairs ate it with confidence.  Soon I had landed 4 and lost a couple others, although none cracked the 5 lbs+ mark. 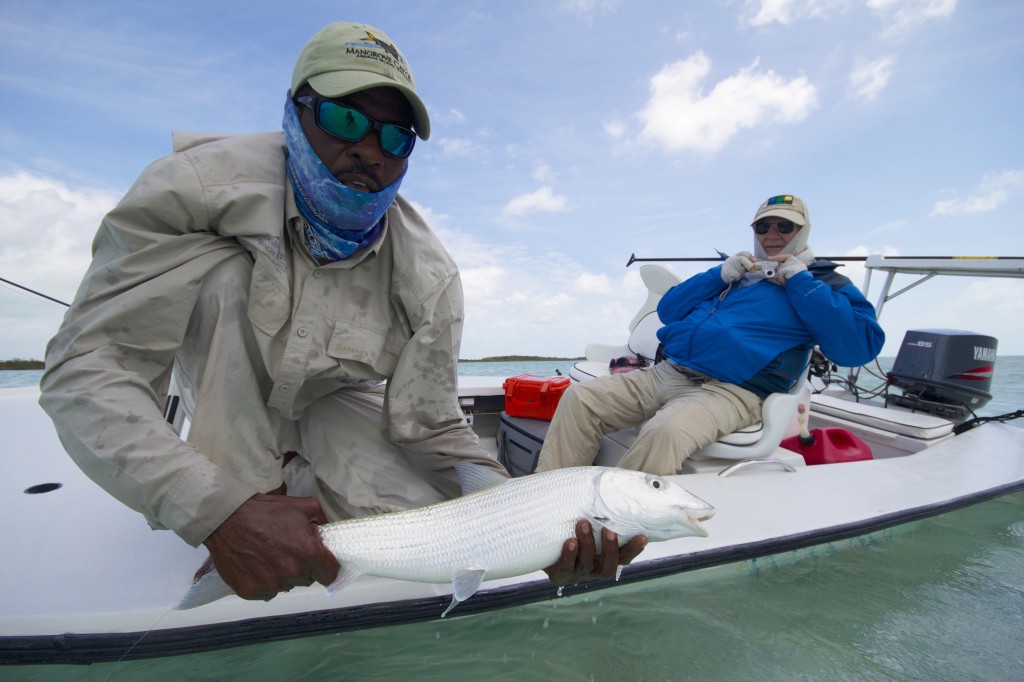 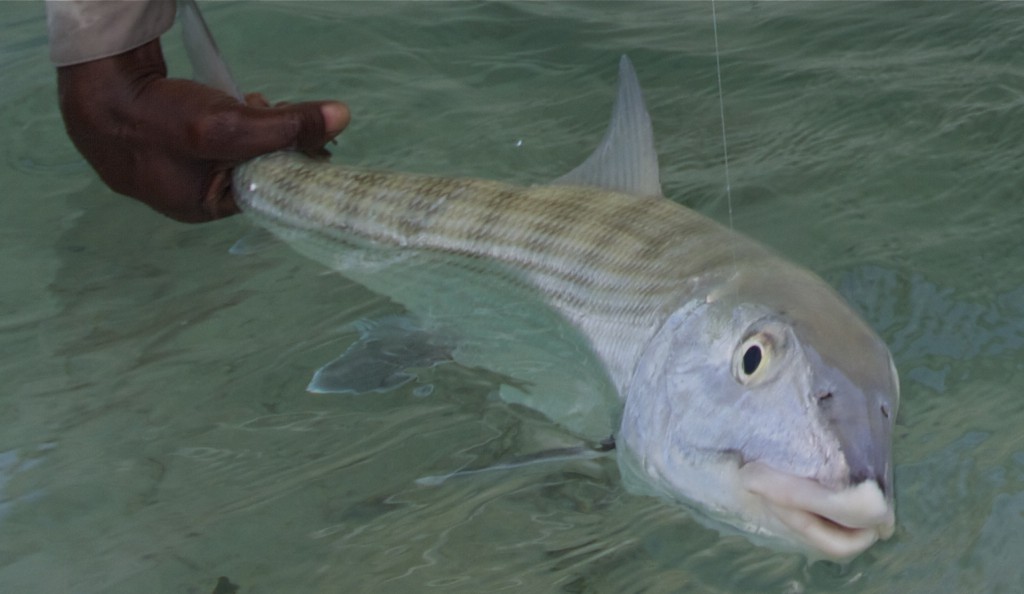 We ended the session by poling a few passes on a giant flat in mid-channel of the Bight.  Prince said this area is rarely fished, and that the deepwater bones that are found here are bigger and stronger than elsewhere in the region.  I was on high alert at all times. 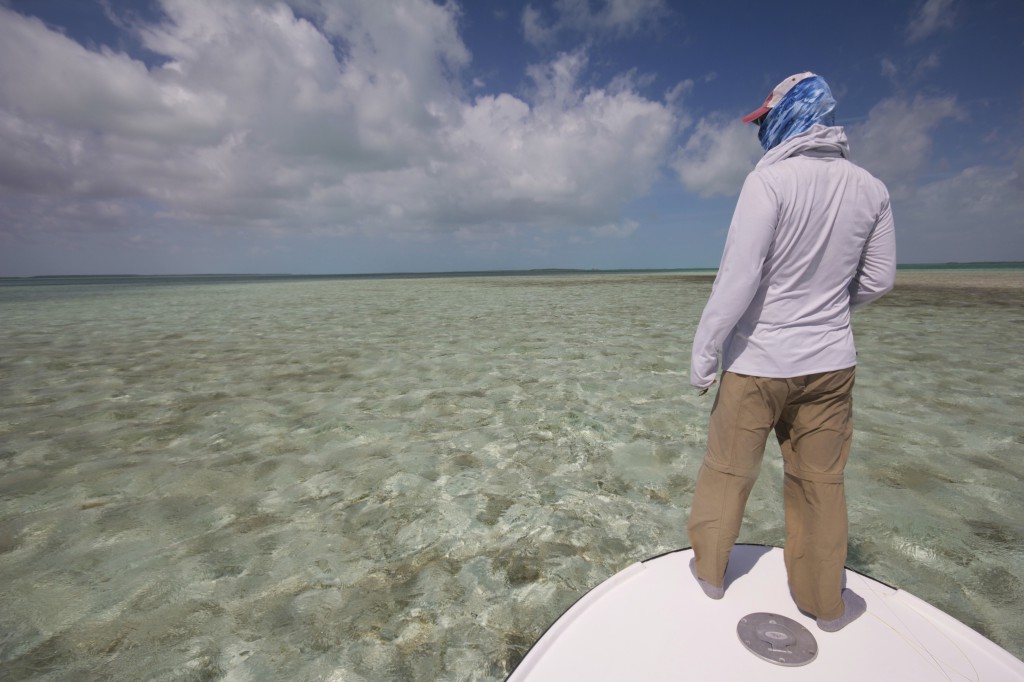 On our last pass, I saw a big green-backed bone meandering along the edge of the drop-off at a good distance to get the cast to him.  Looked to be maybe 6 pounds and clearly would have been the best of the trip.  Alas, the wind and the whims of fishy discretion were not in my favor.  The big fly landed a little too close, the fish noted its presence, made a pulse-quickening feint in the direction of the sinking morsel, and then broke my heart by turning and bolting off the flat to the deep water.

Back at the lodge, Fred and I packed up and readied for the return to everyday reality.  Although the weather had made it tough for us, the trip was a success by any metric.  But as we left the beautiful lodge and the warm and attentive staff, heading for the airport,  I couldn’t help but feel that I had left some great opportunities on the table.  Hopefully it won’t take another 20 years to get my next shot. 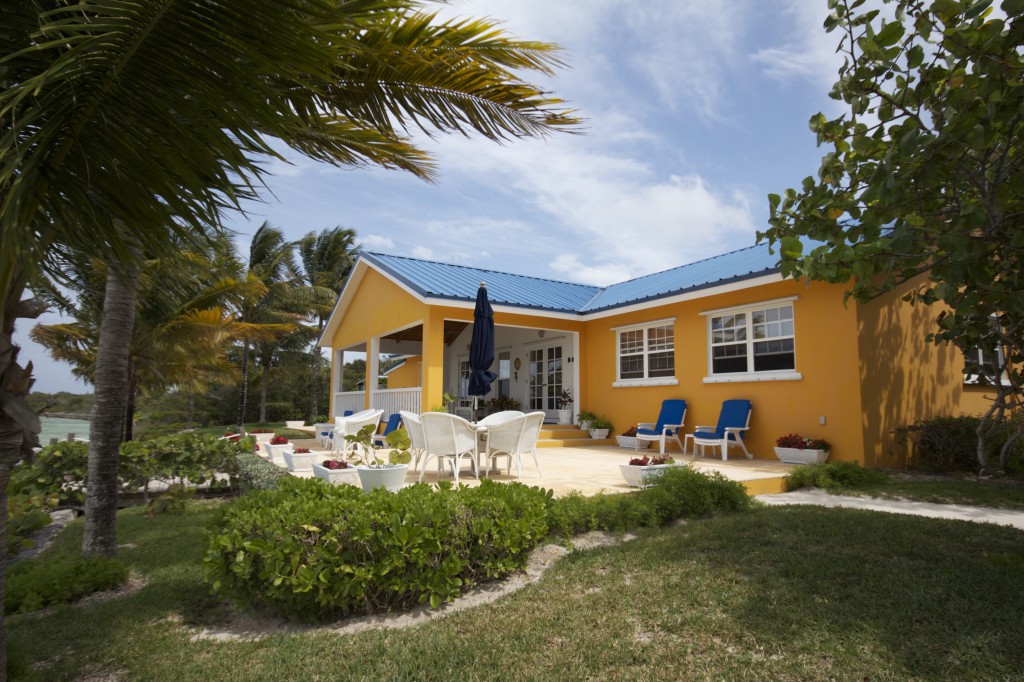 Two Dudes Fly Fishing is your resource for adventure travel off the beaten track.  Give us a call for information on hosted trips and details for adventures of your own.