As the rain drums on the roof overhead, our attention shifts to the coast and the promise of fresh chome in the months to come.  But before we move on, here’s a look back at the magic of Autumn in the Valley.  Enjoy! 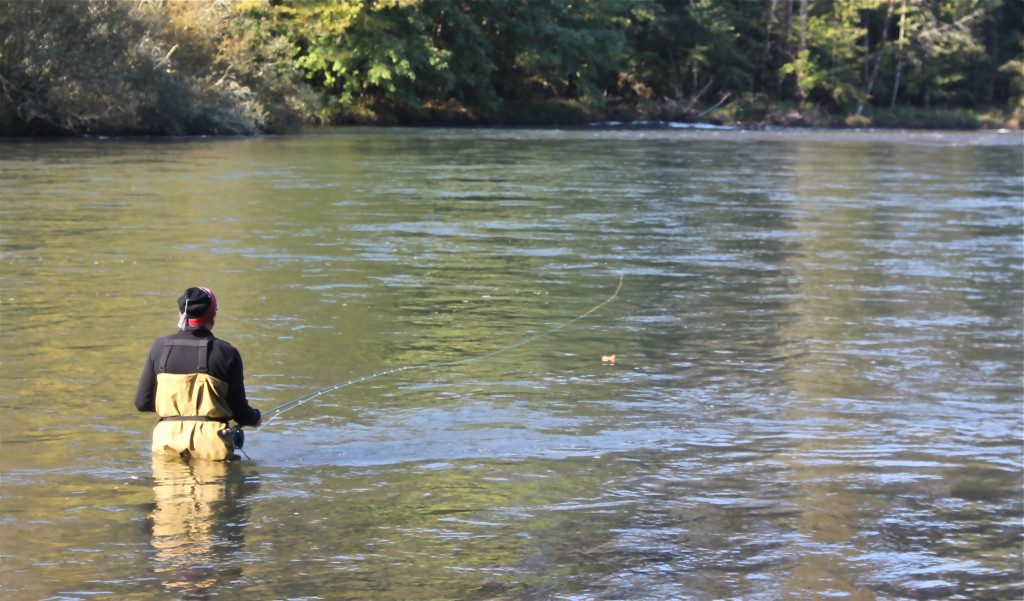 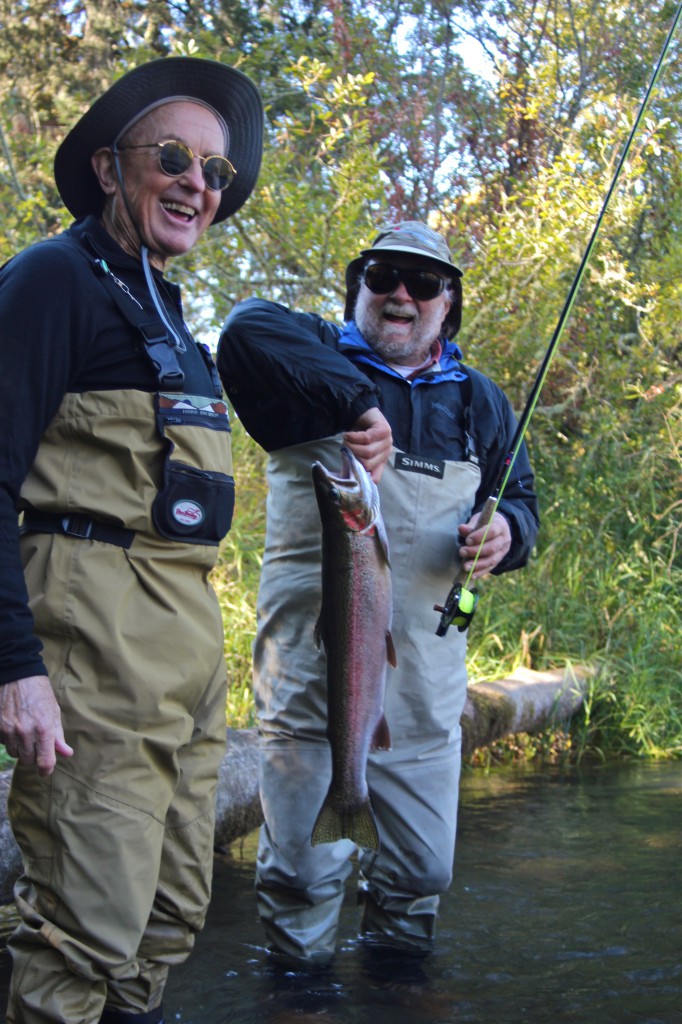 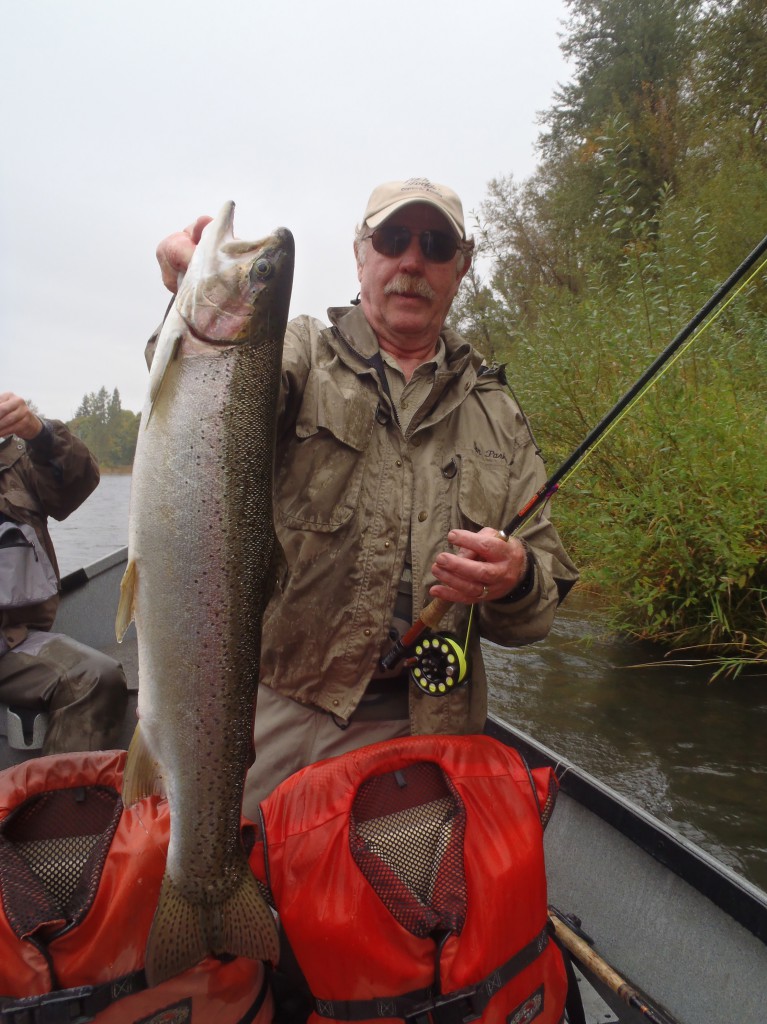 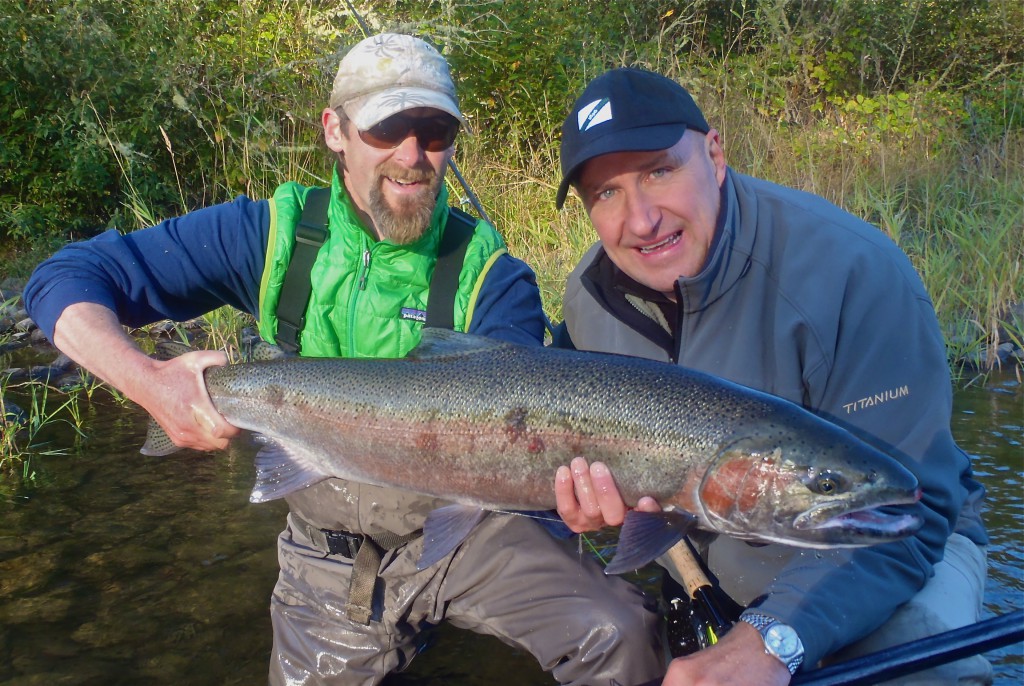 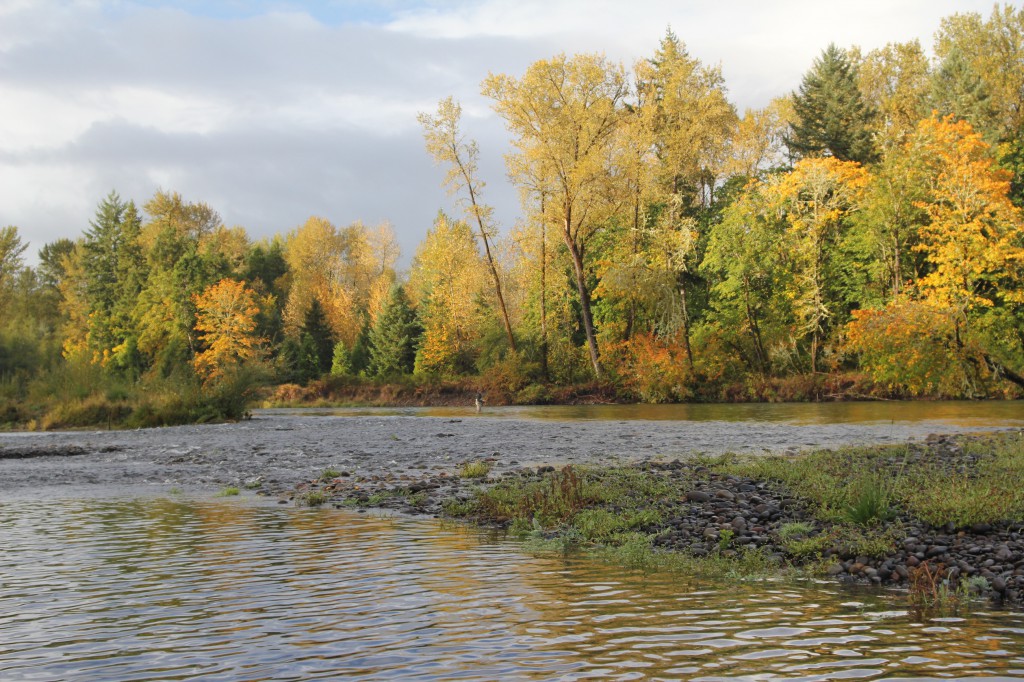 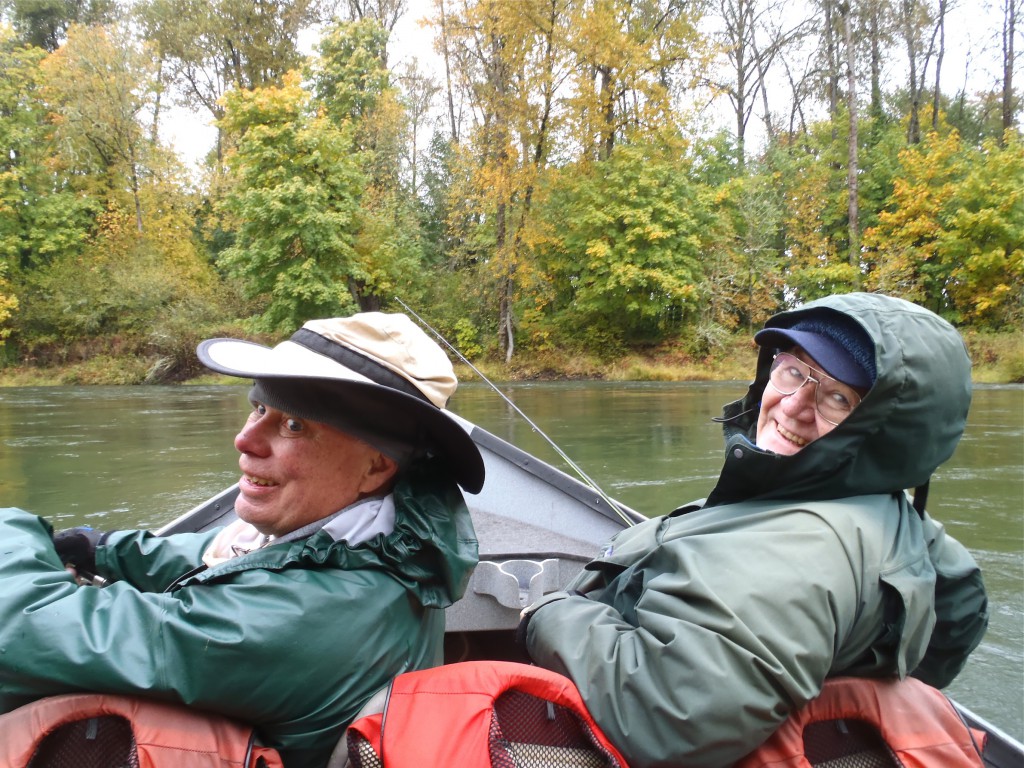 The end of August 2012, found me once again, pulling the tarp over the drift boat, kissing the family goodbye, and strapping in for the long flight over the Pacific to my home away from home at Sweetwater Travel Company’s Taimen Camps.  By now, fifteen seasons in, it almost feels routine: catch up on a few movies I’ve missed, grab some z’s. . . land at Incheon in South Korea.  Waiting for my connection to UlaanBataar, an approaching typhoon lent an eerie beauty to the airfield. 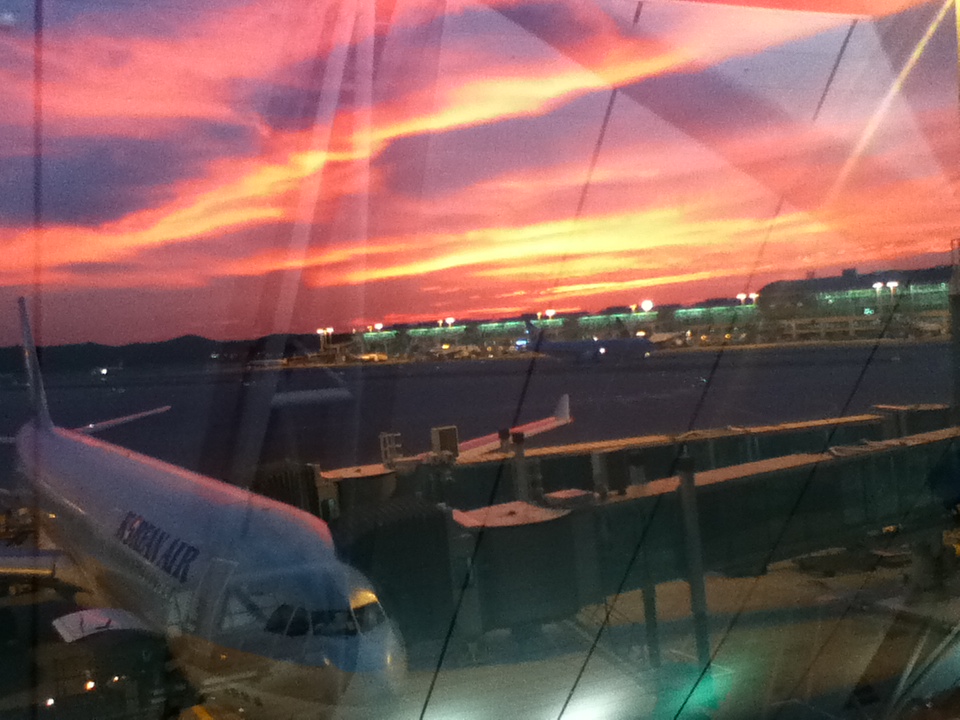 Arriving in “U.B.”, disoriented and jet lagged, I was stoked to see a new sign prominently located at the exit from the baggage claim. Signs of progress on the taimen conservation front make for a warm welcome indeed. The next day, I was met by my good friend, and ace Taimen guide, “Big Fish” Bayaraa Bataar, who drove us out to the banks of the nearby Tuul River where we were to give a fly fishing demonstration to members of the newly formed Mongolian Fly Fishing Association. 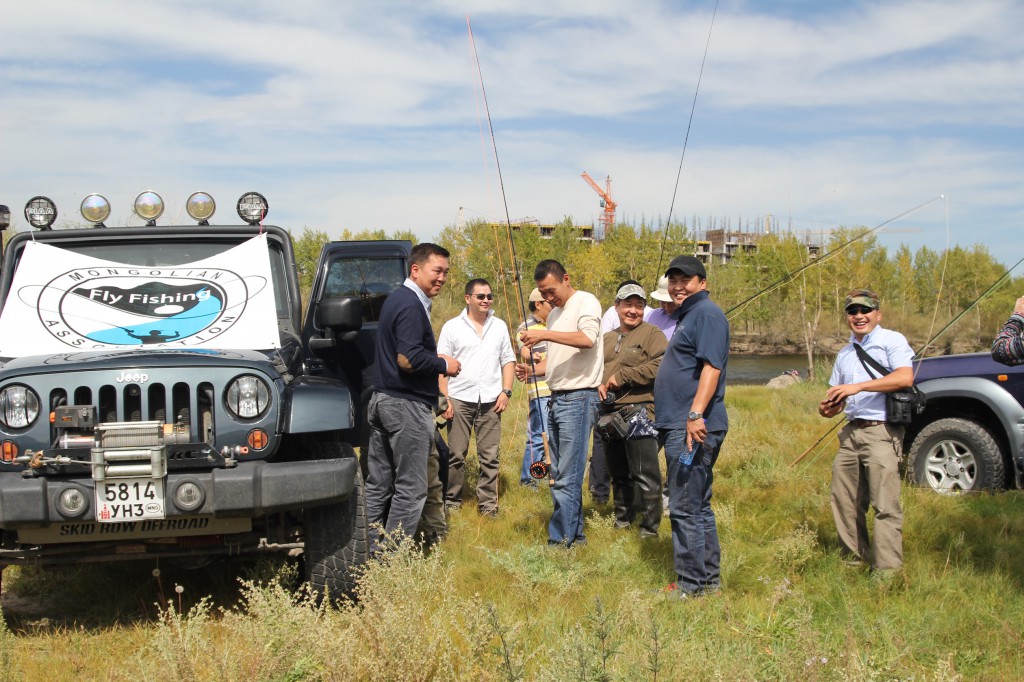 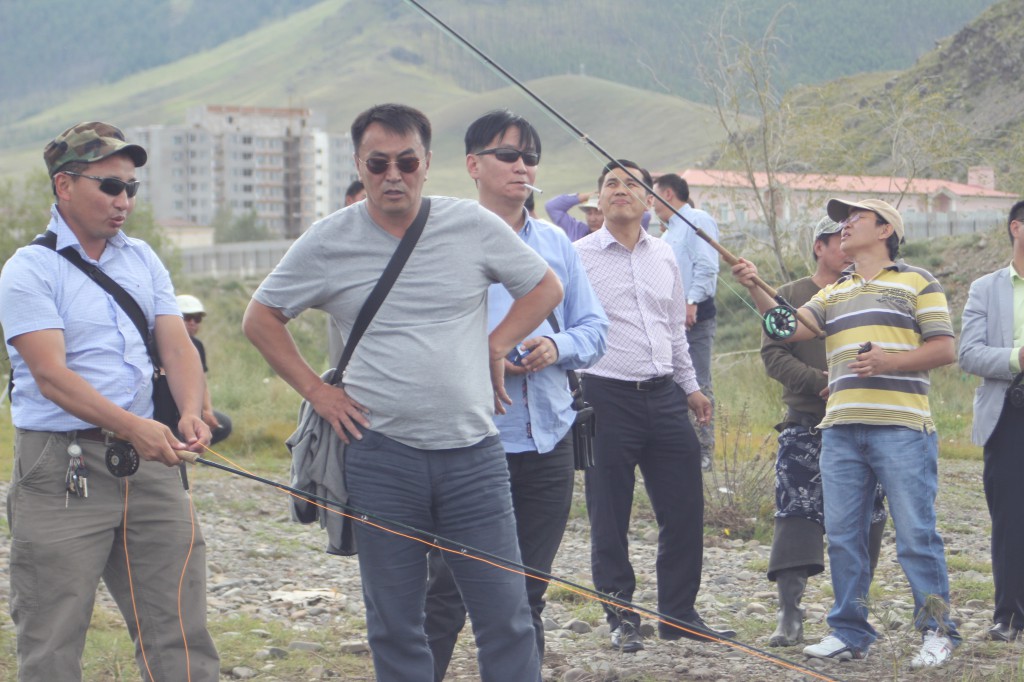 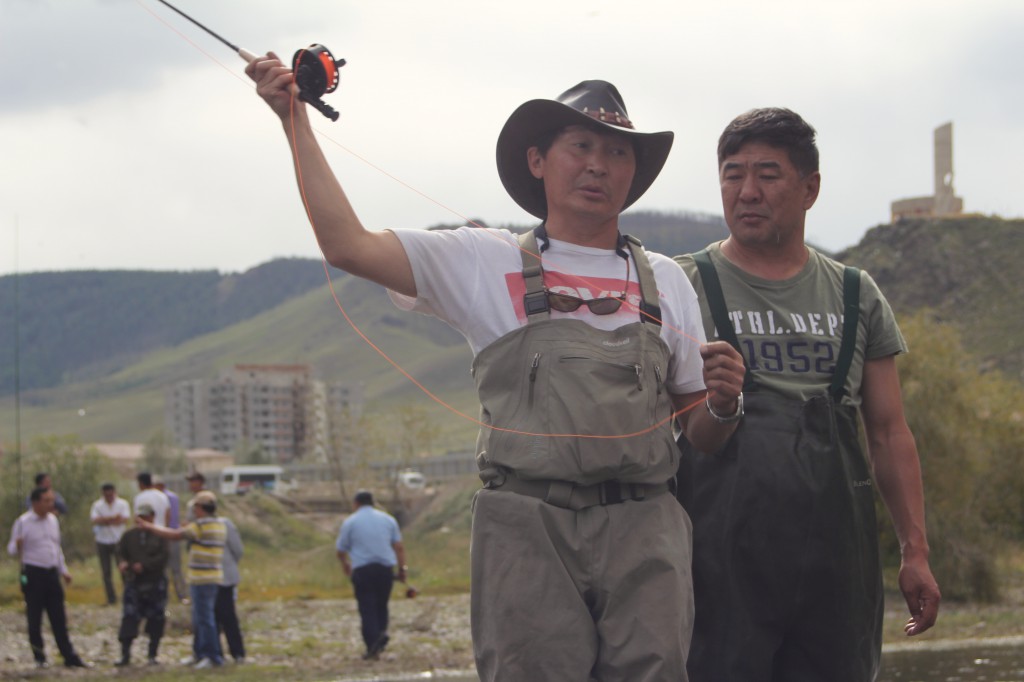 As Mongolia’s economy has grown over the last decade, so has interest in leisure pursuits like fishing among members of the middle and upper classes.  Sensing an opportunity, Bayaraa set up a Facebook page for people interested in fly fishing, and the MFFA was born.  These guys range in experience from expert to total beginner, but all share a passion for fly fishing, fly tying, and conservation.  It is heartening in the face of so many new challenges facing taimen in Mongolia (mining, overfishing, climate change), to find a group of like-minded anglers ready to take up the torch of advocacy. 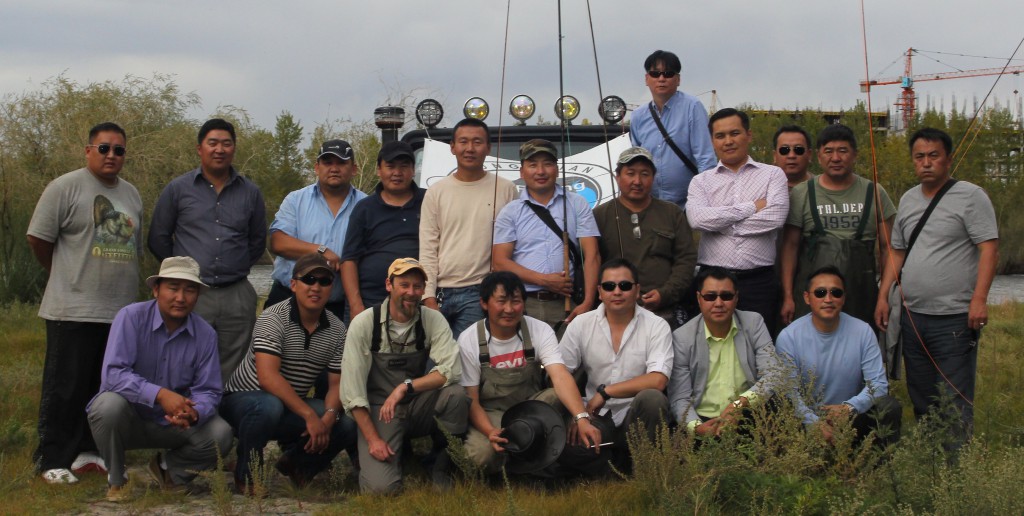 The next day, I jumped in the jeep with Bayaraa, his son, Tamir, and first-year guide, Jako Lucas, for the drive to camp.  I had never made the trip overland from U.B. before and was excited to see this section of the countryside.  U.B. is now plagued by constant traffic jams and air pollution on par with the worst cities in the developing world.  On our way out of town we came upon no fewer than 4 accidents.  Bayaraa got a ticket for driving on a day when vehicles with certain license plate numbers were forbidden to drive (a recently implemented band-aid measure intended to reduce the gridlock). The drive to the Tarialen Camp took just over 12 hours.  When Bayaraa got sleepy, I took the wheel and enjoyed bouncing everyone around for a few hours of rallying.  The views along the route were awesome, and sometimes kinda weird. 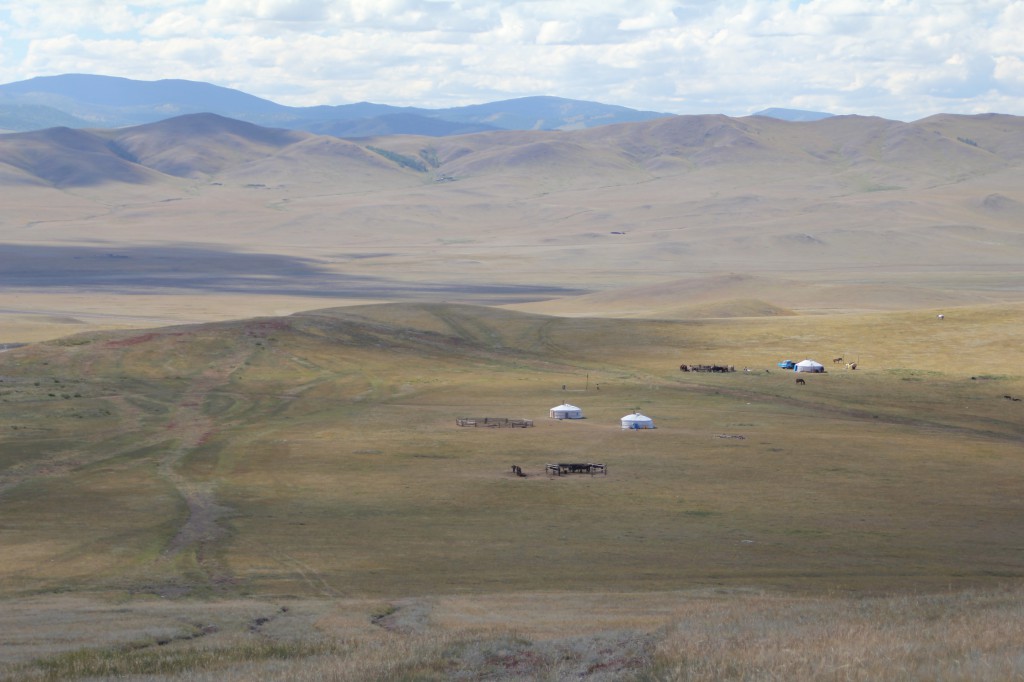 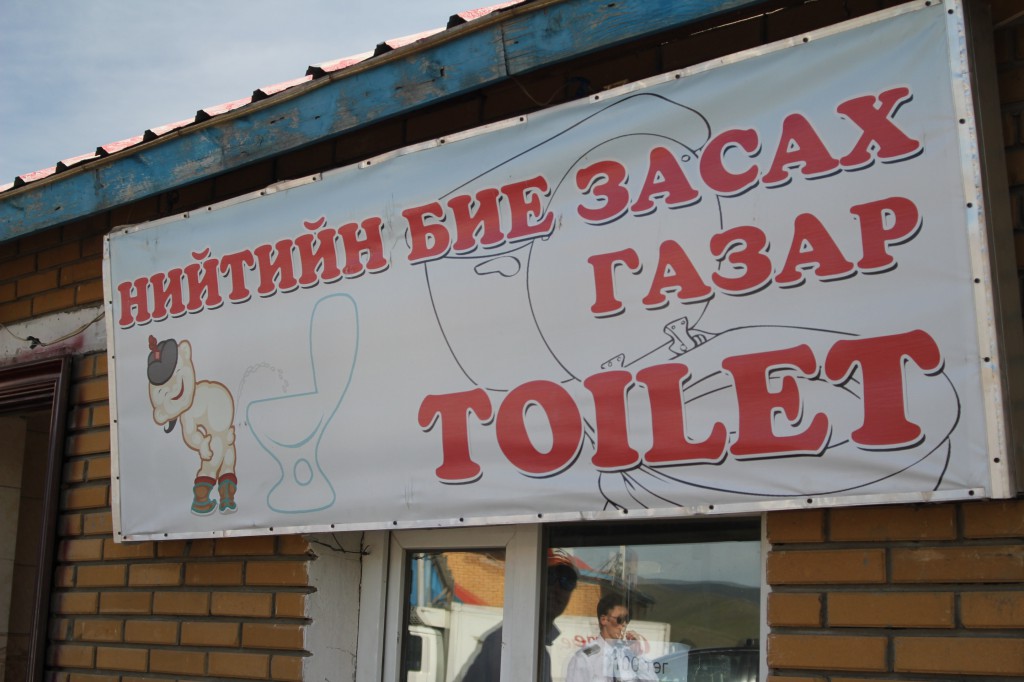 Arriving in camp, we settled in to getting things open.  Jako and I noticed a bunch of fish rising right in front of camp.  Jako raced to set up a 5 weight in hopes of catching his first Mongolian fish.  Now you should know, at this point, that Jako is kind of a big deal in the guiding world.  At just south of 30 years old, South African “Golden Boy” Jako Lucas’ resume includes Head Guide status for a major outfitter in the Seychelles as well as 5 seasons guiding for monster Atlantic salmon in Norway.  Jako’s video of giant trevally fishing in the Seychelles recently won the prestigious Drake Magazine Fishing Video of the Year award.  His hard drive runneth over with giant fish porn that would make any angler’s knees tremble.  And so it was that Jako hunted down and landed his first Mongolian trophy.  Stoked! 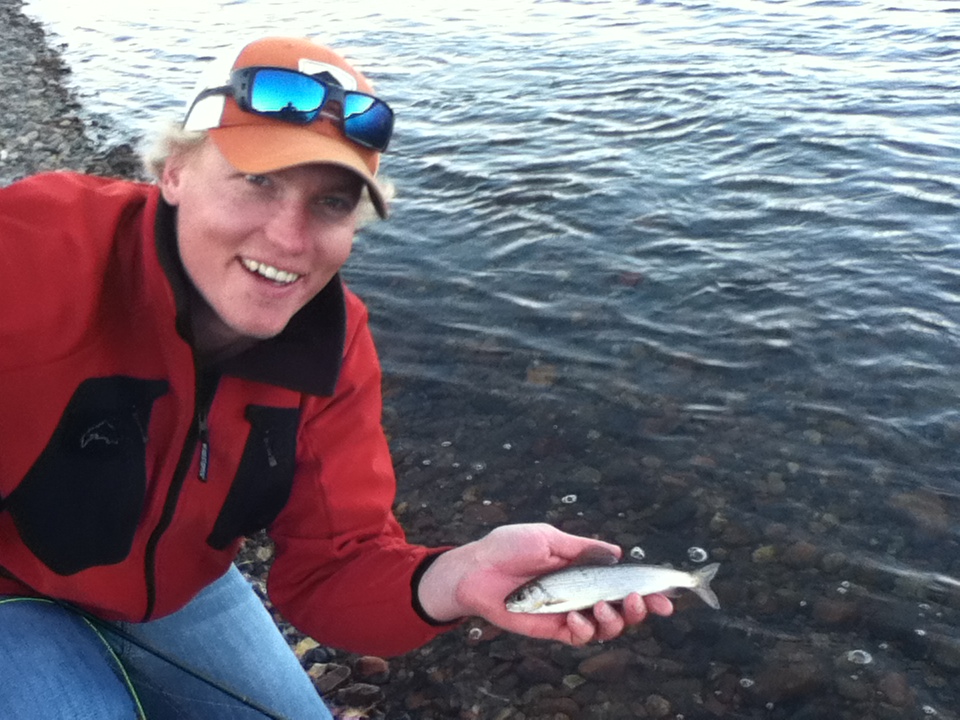 Bayaraa and I spent the next few days, showing Jako around and training him in the lower beat.  Then came the first guests, a crew of Aussies led by none other than Charles Barrett Jr. who you’ll remember from the 2009 and 2010 reports.  He had skipped Mongolia in 2011 to chase steelhead in B.C.,but was now back with his friends and family for another week of his favorite freshwater challenge:  giant taimen on the fly.  His crew got comfortable with the fishing and the scene.

At midweek, the weather changed from bright and sunny to cloudy and cooler.  Fish went on the bite, and Charles Jr. found his biggest taimen to date in one of the runs down river with Jako.  The chorus of swearing and hollering could be heard for miles.  And no wonder. 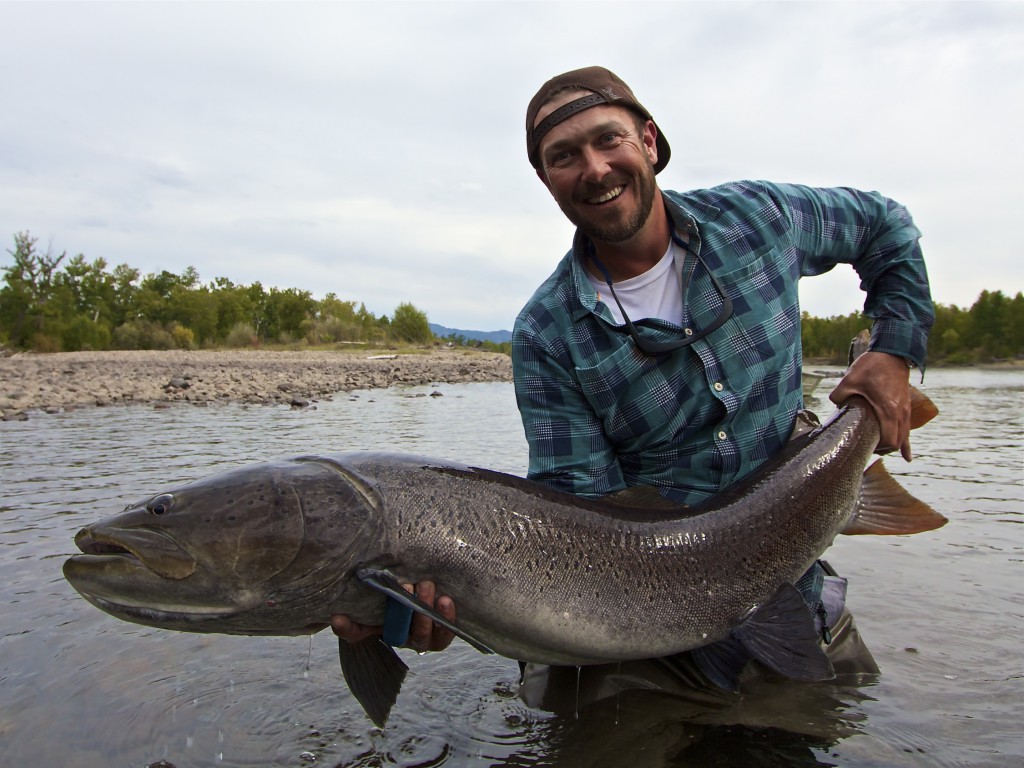 The day closed with a perfect sunset over camp, and drunken revelry ensued.  Aussies can put away the piss, when the occasion warrants. Throughout the first three weeks, the lenok and grayling fishing was excellent, and most anglers enjoyed a break from toiling with the big rods in the taimen mines. 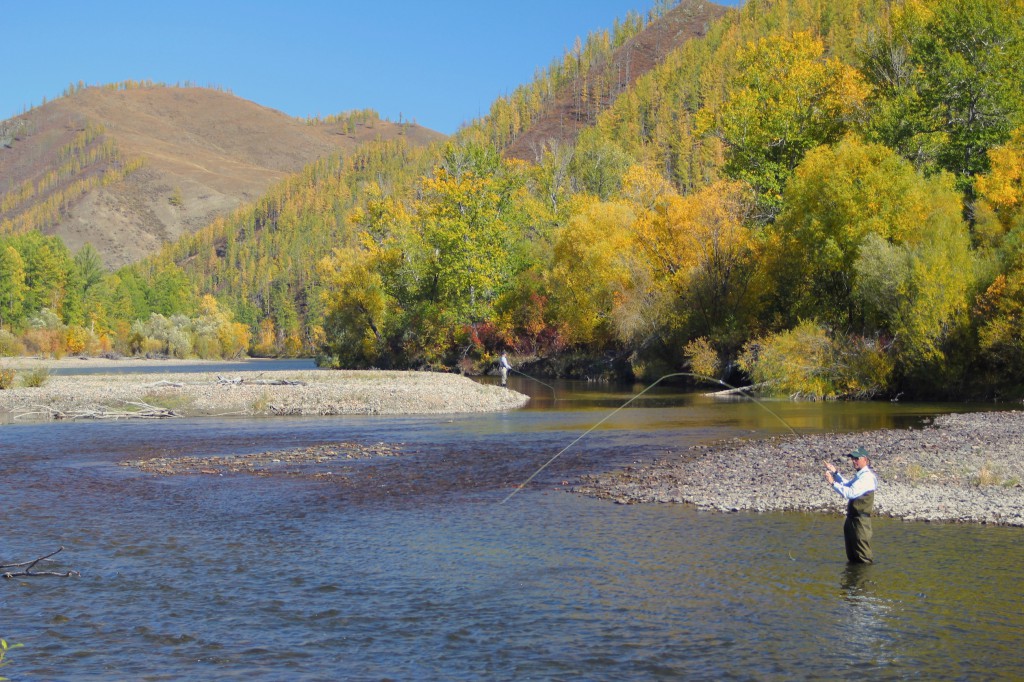 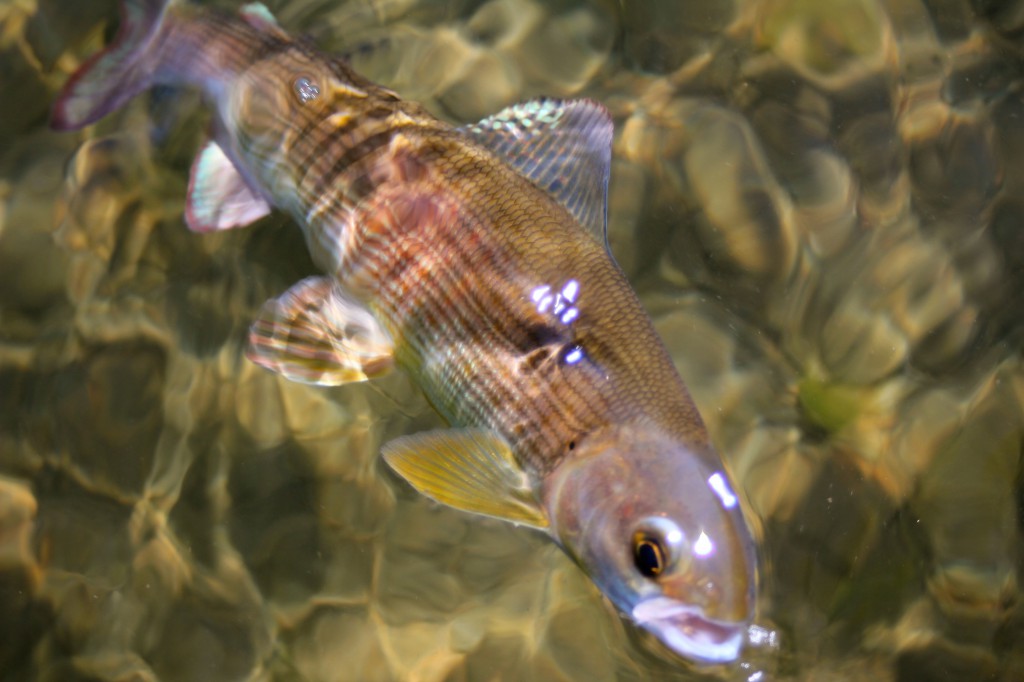 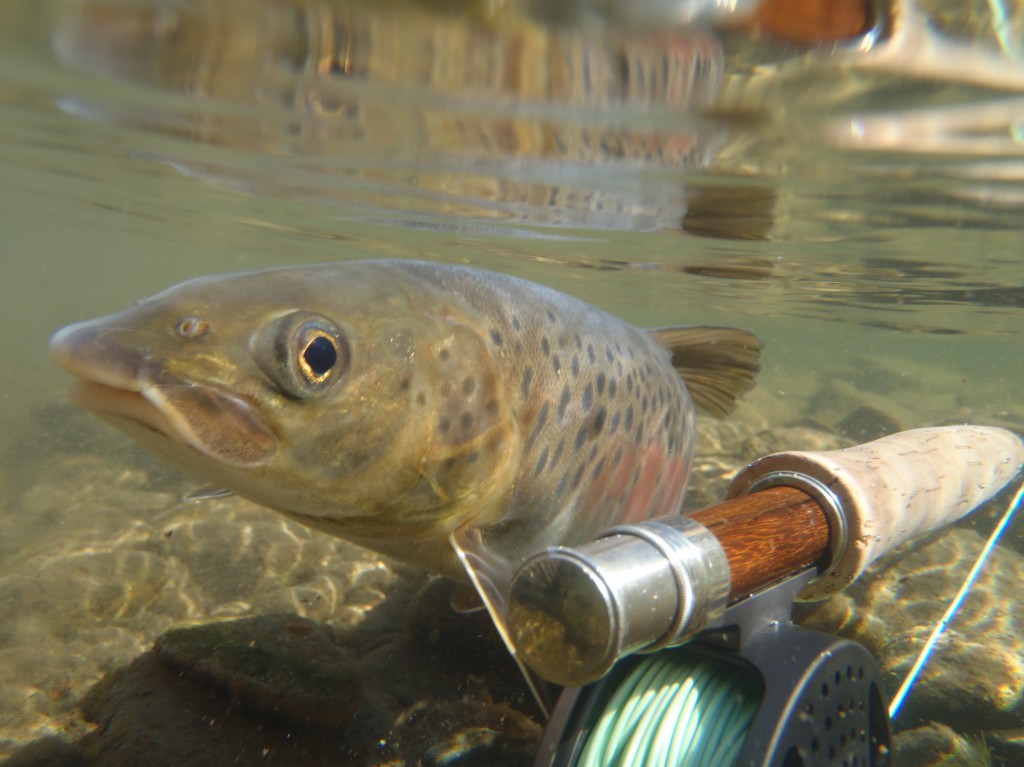 This year I found myself taking many photos from a drawn-back perspective.  Maybe I was trying to capture a sense of wide open and often epic grandeur of this fishery.

Meanwhile, as Bayaraa and I brought in some good numbers of fish, Jako continued to land big ones in his beat.  He got at least one 4-footer each week.  His enthusiasm for the pursuit was inspiring to all.  Here’s one landed by David Snyder from Connecticut. In Mongolia, the days and weeks become a rhythm. Each day, each cast: a fresh chance to land the fish of a lifetime.  On how many fishing trips can you really say that?  At the end of the day, no matter the outcome, a hot shower, a gourmet meal, and a good night’s sleep await before the next day’s mission.

The last week of the season, the weather finally turned from the glow of Indian summer to the sting of the coming winter. Anyone who dreams of one day living an encounter with one of the daughters of the river gods, can help to ensure that they swim in these waters forever.  Contact veteran taimen guide and tireless advocate for taimen conservation, Charlie Conn of the Tributary Fund and lend your support to the cause.   You can email him at conncharlie@gmail.com.

The taimen are still there.  Under the ice they will lurk, awaiting the coming of spring and the chance to spawn and to hunt the denizens of their watery world.  And they will continue to haunt the dreams of the anglers who have met them in this special place. 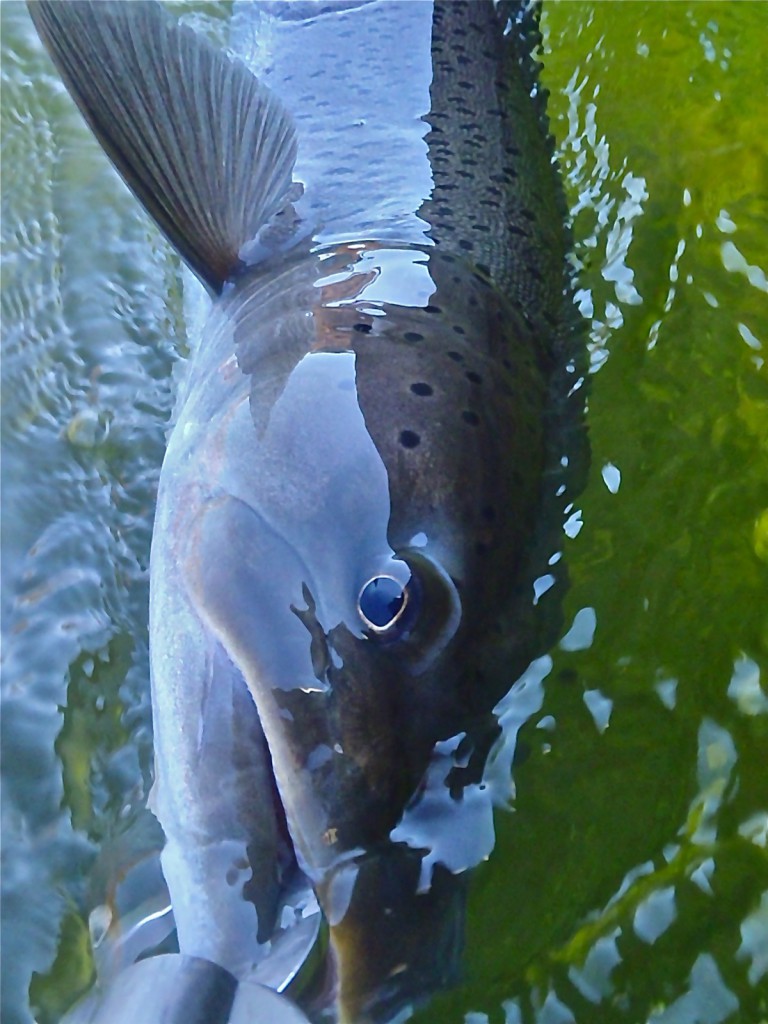