On a recent family visit to the Puerto Vallarta region of Mexico, I had the opportunity to join one of my old Mongolia guide buddies, Chip King, for a day on the waters of the tropical Pacific. Chip crews all winter on the “Redneck,” a 75′ luxury yacht geared for heavy duty ocean outings in pursuit of Dorado, Yellowfin Tuna, Marlin, etc.  I jumped at the invitation to try a kind of fishing I’d never experienced. I’d always assumed that this kind of fishing had the potential to be soul-crushingly boring but hoped for a chance to see something completely out of scale from the normal world of Oregon fly fishing.
We spent the night before the trip on the boat. Entering the marina in Nuevo Vallarta, we passed a prominent reminder of a previous glory day for the Redneck. 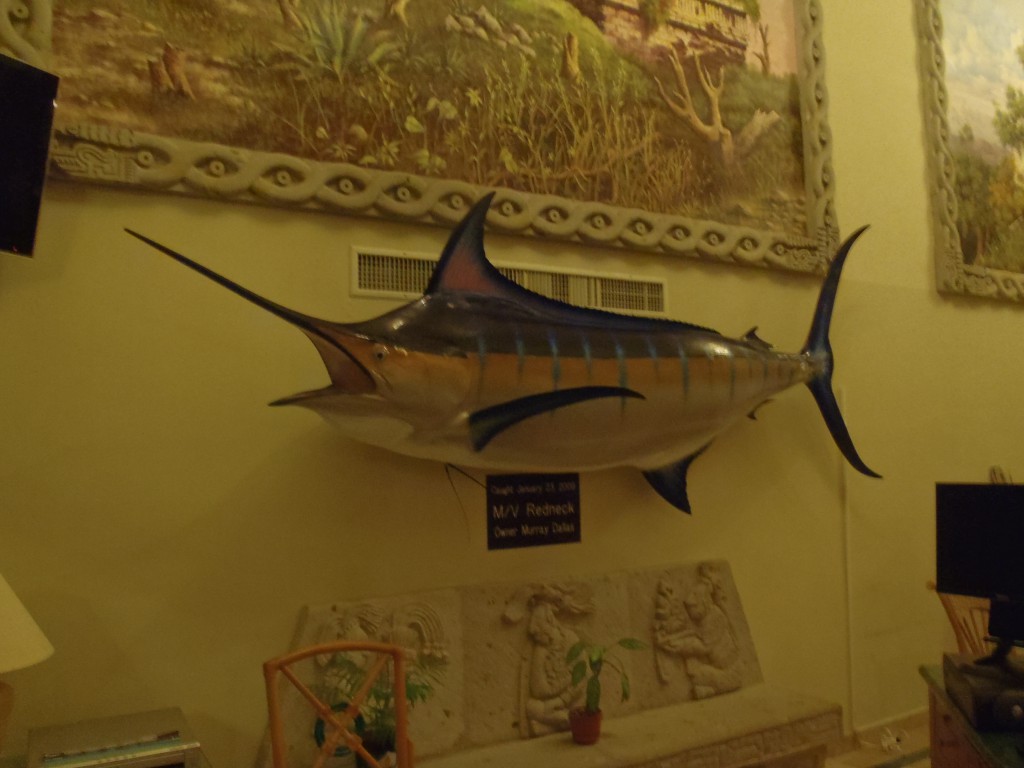 Chip and I drank a few beers and fished live baits pilfered from the Redneck’s livewell under the dock lights in the marina. 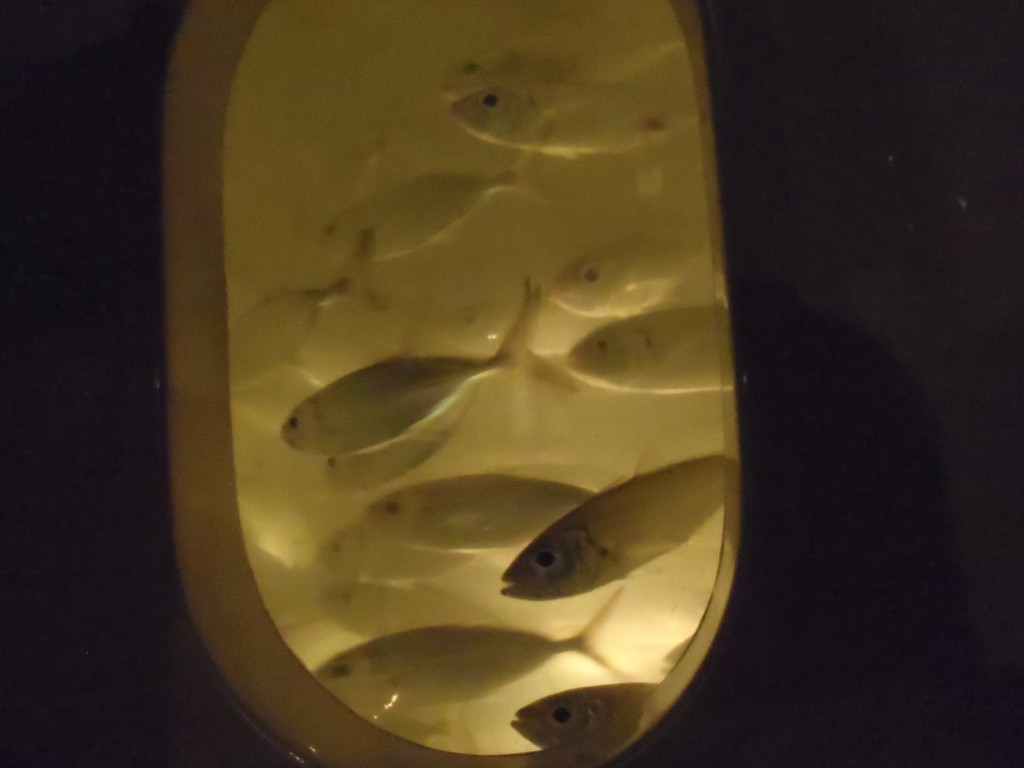 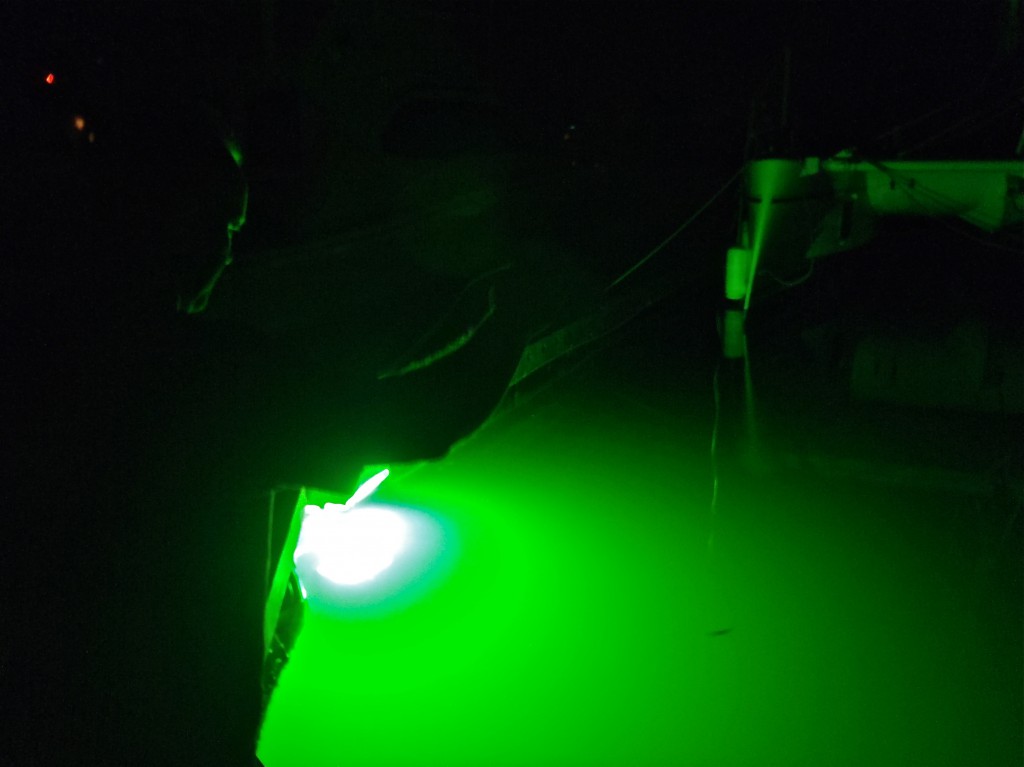 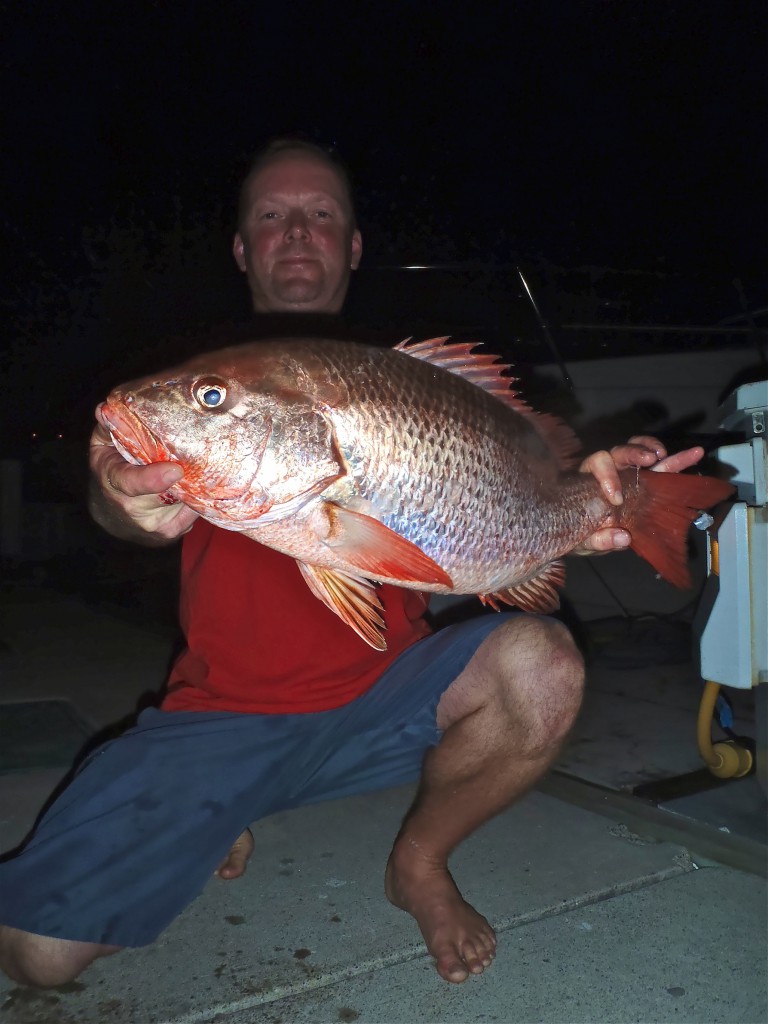 We caught a corvina, some red snapper, and saw a few snook. Something unidentified that looked like about a 40 pounder swam through in pursuit of the minnow, but it never closed the deal.
The next morning, I tried to be helpful without getting in the way. Tim, the Redneck’s captain got me quickly out of his hair by sending me off to swab the dew off the owner’s other boat (which we wouldn’t be using that day).
Around 6 a.m. the Redneck’s owner and his famlly/guests arrived. We left the marina in full darkness.  On the hour and a half run out of the Bahia de Banderas, we saw whales basking on the surface and dolphins dancing on the wake off the prow. 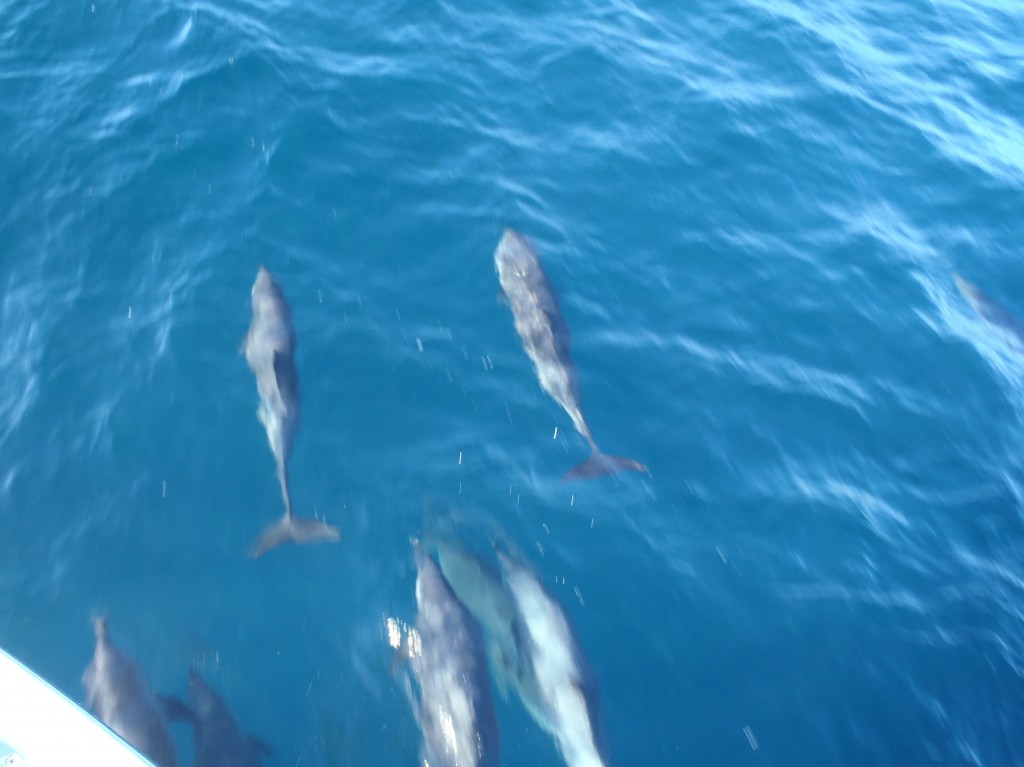 Once out to the open waters, the crew was on full scan for birds and spinner dolphins which would indicate feeding yellowfin tuna schools. 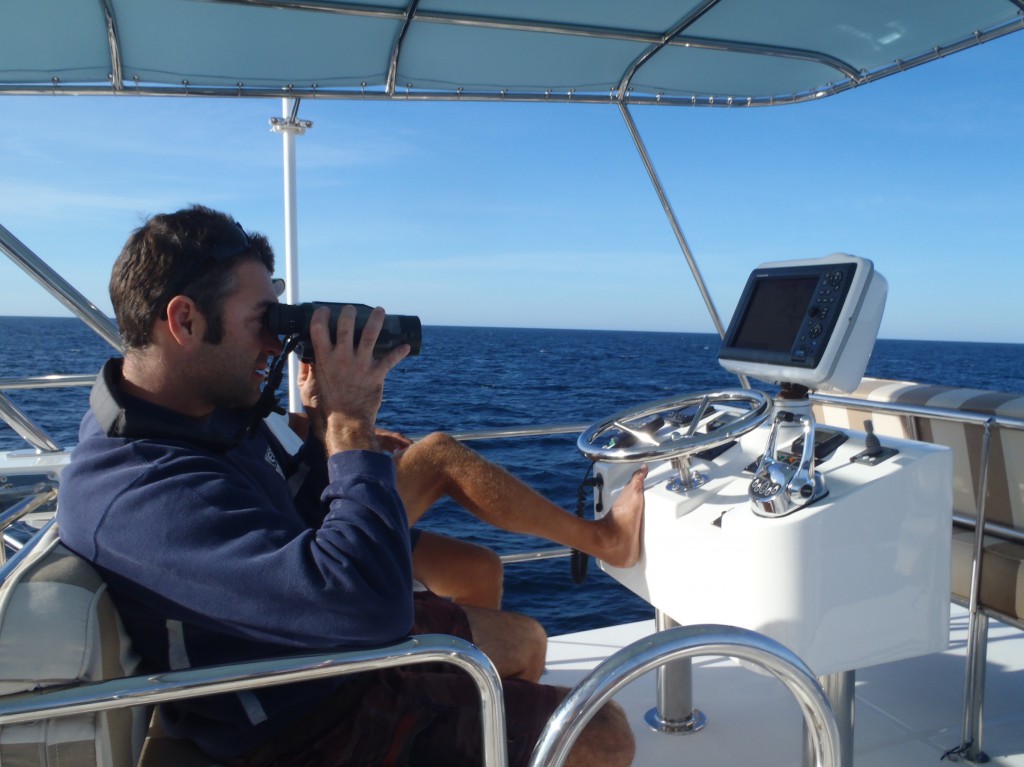 I was on call to deploy and reel in the rubber-skirted jigs that we trolled behind the boat. I had a hard time getting comfortable with the cartoonishly-scaled tackle. 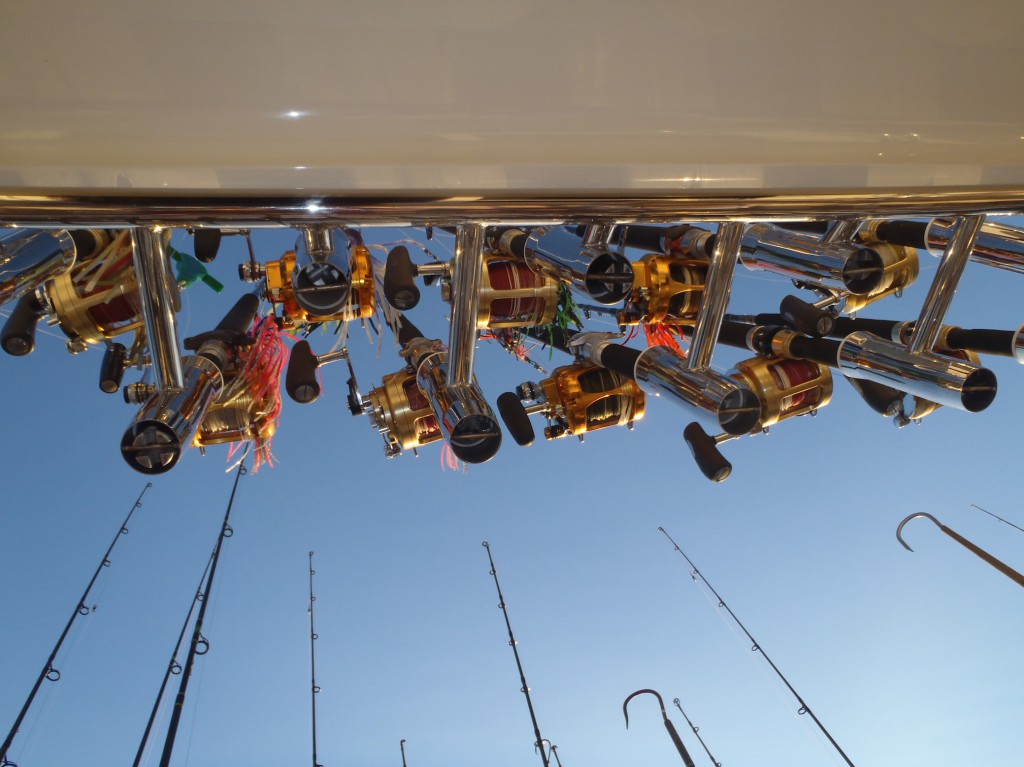 And then. . .  nothing happened. We trolled around for about 12 hours, the owner and his guests got roaring drunk (or slept), and Chip served some excellent meals at strategic intervals. All in all it was like a first class transpacific airplane ride (with turbulence). 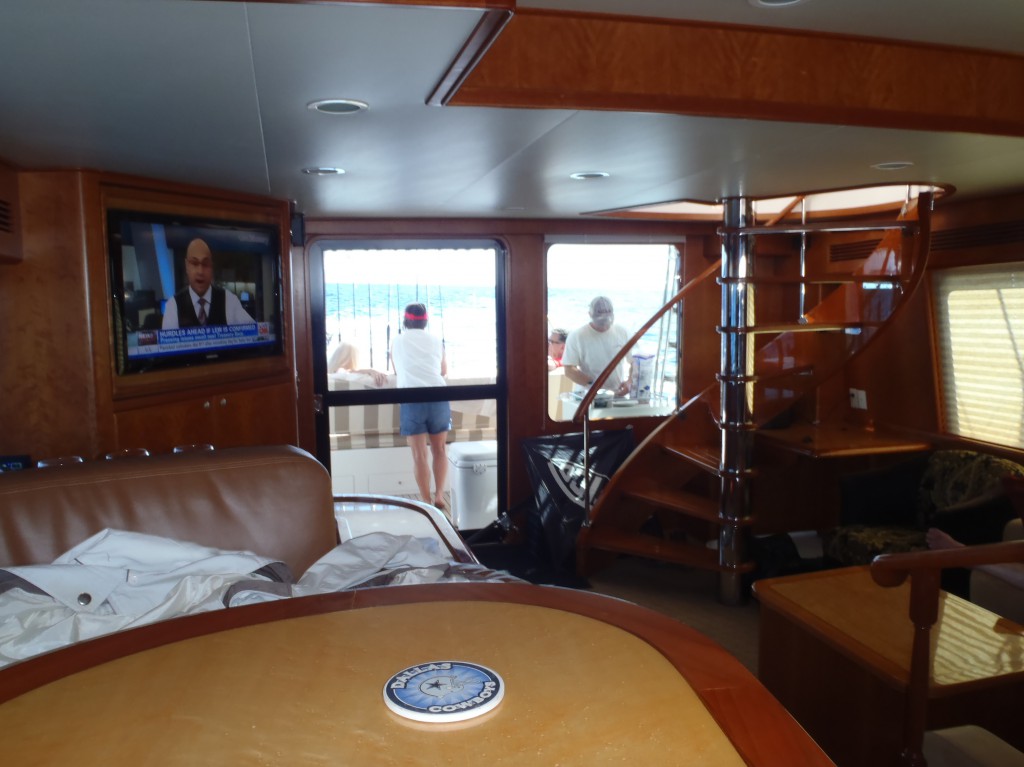 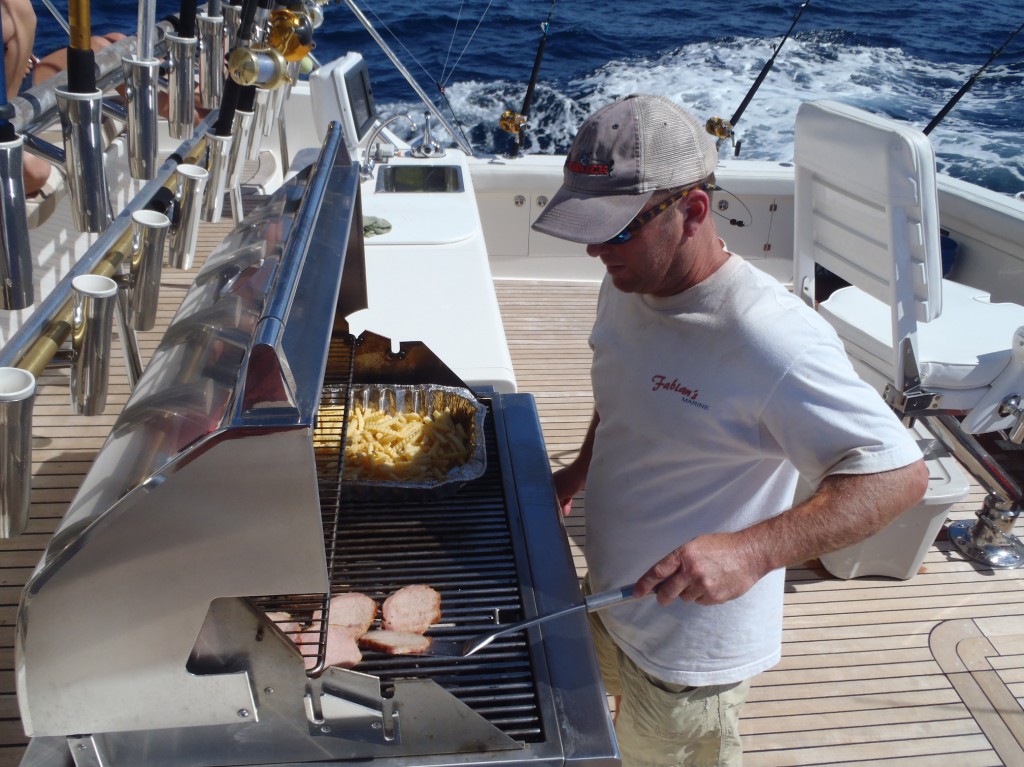 In the last 10 minutes of trolling with light failing, I saw one of the baits in the wake get grabbed. Line buzzed off the heavy reel and we all brought in the other rigs before pulling the rod from its holder. It fell to me to reel in the fish. I saw it jump: a large dorado that looked to be 40-50 pounds. I reeled it close to the boat sensing that the fish was still very green. Before we could get a good look at it, the fish made an astonishingly powerful lunge, and the 250 lb. shock tippet parted. Captain Tim howled with dismay, and that was that. We headed for port. 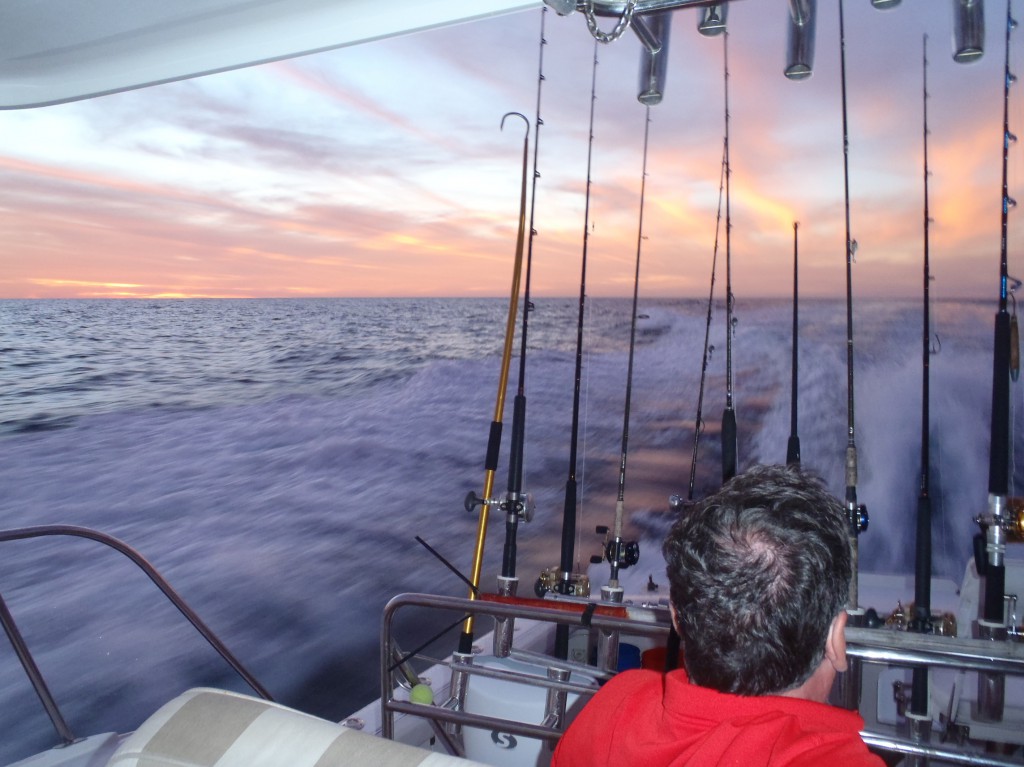 A unique fishing experience to be sure.  Thanks, Chip, Murray, Nick, Luis, and Captain Tim for the day.
In the future, I’ll probably stick to fly fishing.